CANBERRA, Australia – Australia’s newly reelected government said Tuesday that its promise to slash income taxes might be delivered late but would not be broken as it seeks to stimulate consumer spending, revive a flagging economy and repair relations with China, its most important trading partner.

Prime Minister Scott Morrison chose the latest possible date to call an election that on Saturday delivered his conservative coalition a surprise victory. 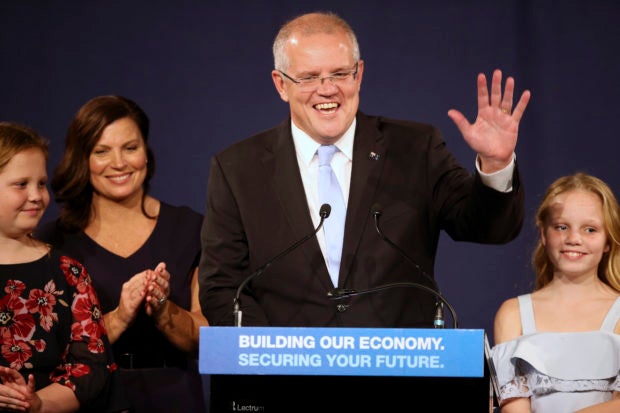 FILE – In this May 19, 2019, file photo, Australian Prime Minister Scott Morrison, second right, speaks to party supporters flanked by his wife, Jenny, second left, and daughters Lily, right, and Abbey, after his opponent concedes in the federal election in Sydney, Australia. Australia’s newly reelected administration says its promise to slash income taxes might be delivered late but won’t be broken as the government hopes to stimulate consumer spending and revive a flagging economy. (AP Photo/Rick Rycroft, File)

But the timing means he probably won’t be able to recall Parliament to pass the tax cuts before July 1 — the date he promised during the election campaign that the lower tax rate would take effect.

Treasurer Josh Frydenberg said passing the legislation, which would reduce the annual tax bill of 10 million Australians by 1,080 Australian dollars ($740), is the government’s first priority when Parliament resumes.

Frydenberg could not say when the law would be passed, but said media reports that the new tax rates might not come into effect until July 1 next year were wrong.

The tax break was outlined in April in the government’s annual budget blueprint for the next fiscal year, which starts on July 1.

“Let me be very clear: The tax relief outlined in the budget will be delivered to millions of Australians,” Frydenberg said.

However, the ruling coalition will not hold a majority of seats in the Senate, so the government will need the support of the center-left Labor Party opposition or minor parties to pass the tax law legislation.

Because of the weakening economy and persistent low inflation, Reserve Bank of Australia Governor Philip Lowe suggested on Tuesday that the central bank board was likely to reduce its benchmark interest rate below the current record low 1.5% when it next meets on June 4.

The rate has not changed since August 2016.

In more concerning news for an Australian economy that has grown for 28 years without a recession, a university study released on Tuesday found that Chinese investment in the country fell by 50% between 2017 and 2018.

Researchers said the decline was in line with global Chinese investment trends.

Frydenberg said Australia was susceptible to the trade tensions between China and the United States, Australia’s biggest source of foreign capital.

“But the fundamentals of the Australian economy are sound.”

In better economic news, the government’s reelection contributed to a AU$33 billion ($23 billion) surge in the stock market on Monday to an 11-year high, in part because of expectations of a better business environment and tax cuts. /gg