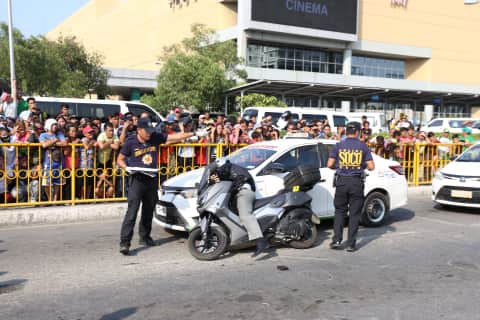 (Note: Here is a revised story about Bontuyan’s slay. There’s no clear source that Bontuyan was among the policemen tagged as narco cops by President Duterte. Police officials here said they are still checking the background of Bontuyan. While he was transferred to Mindanao in 2016, they are still unsure whether or not Bontuyan was on the narco list. We apologize for the mistake. – Inquirer Visayas Bureau)

Lt. Col. Delfin Bontuyan was just a few meters away from the Cebu City Hall of Justice when four men on board two motorcycles shot him at past 2 p.m.

Bontuyan, 55, and a resident of Barangay Talamban in Cebu City, suffered gunshot wounds on his head, nape, and back.

Police investigators said the policeman just came from a hearing of a drug case where he stood as the complainant.

“He was on his way home when he was shot,” they said.

Bontuyan served as an officer of the Criminal Investigation and Detection Group in Central Visayas (CIDG-7).

In 2016, Bontuyan was assigned at the Cordillera Autonomous Region and was subsequently transferred to Jolo, Sulu where he was assigned as chief of a police station.

Bontuyan came back to Cebu to attend a court hearing.

On Election Day, his daughter Christine, Sangguniuang Kabataan chairperson of Talamban, claimed to be harassed by policemen.

“The father of the girl who makes the post about being harassed by (policemen) was murdered today. Yesterday, he was approached by CIDG who asked him what his relationship is to Christine Bontuyan who was harassed by police during Election Day. Today he was shot and killed,” said Cebu City Mayor Tomas Osmeña in a post on Facebook. (Editor: Leti Z. Boniol)