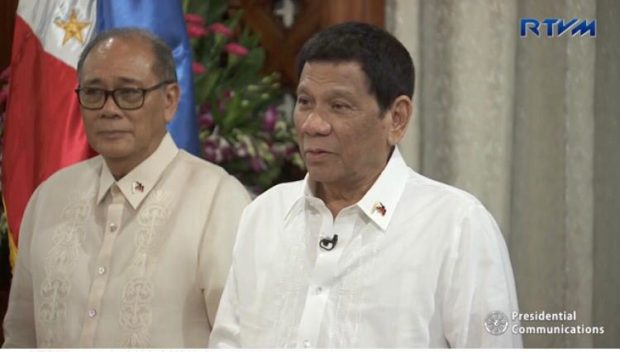 President Rodrigo Duterte makes his first appearance after a weeklong hiatus from the public eye on May 21, 2019. The President welcomes Thailand Ambassador to the Philippines Vasin Ruangprateepsaeng in Malacañang. Screengrab from RTVM

MANILA, Philippines — President Rodrigo Duterte made his first appearance on Tuesday after a weeklong absence from the public eye.

Duterte welcomed Thailand Ambassador to the Philippines Vasin Ruangprateepsaeng in Malacañang during his presentation of credentials.

Speculations surfaced that Duterte was seriously ill after he was out of the public eye for a week.

Duterte was last seen in public on May 13 when he cast his vote in Davao City. Since then, he has had no public events.

Malacañang officials have said there was nothing wrong with Duterte.

He also revealed that he had colonoscopy and endoscopy and that he has been undergoing regular blood tests. (Editor: Eden Estopace)