Rocket attack hits near US Embassy in Baghdad’s Green Zone 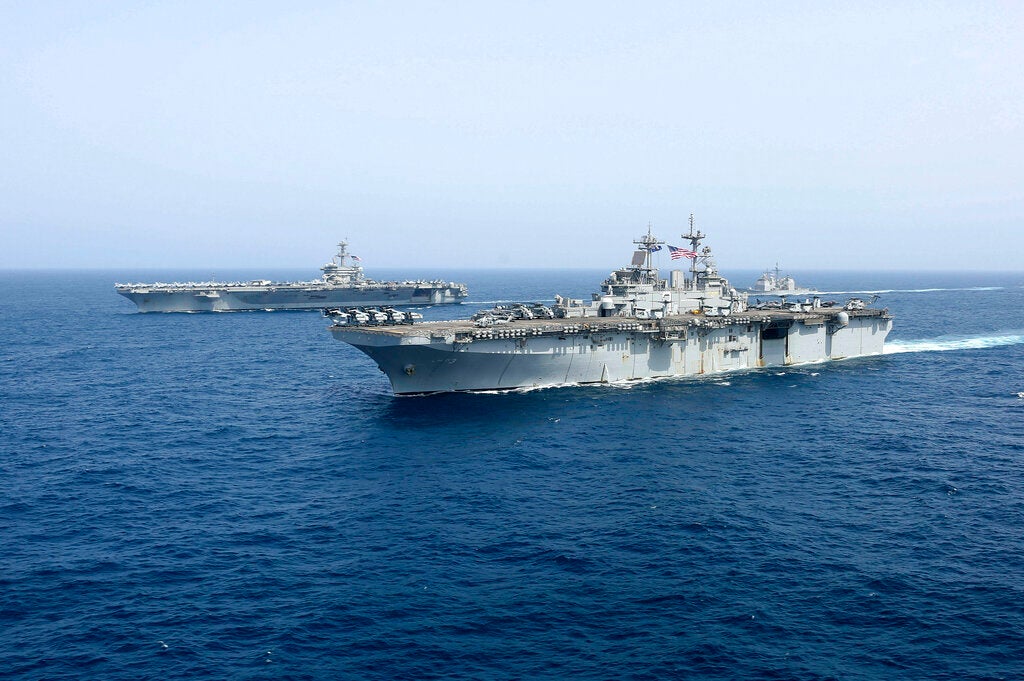 In this Friday, May 17, 2019, photo released by the U.S. Navy, the amphibious assault ship USS Kearsarge sails in front of the USS Abraham Lincoln aircraft carrier in the Arabian Sea. (U.S. Navy via AP)

BAGHDAD — A rocket was fired into the Iraqi capital’s heavily fortified Green Zone Sunday night, landing less than a mile from the sprawling U.S. Embassy, an Iraqi military spokesman said.

The apparent attack, which Iraq’s state-run news agency said did not cause any casualties, came amid heightened tensions across the Persian Gulf, after the White House ordered warships and bombers to the region earlier this month to counter an alleged, unexplained threat from Iran. The U.S. also has ordered nonessential staff out of its diplomatic posts in Iraq.

It was the first such attack since September, when three mortar shells landed in an abandoned lot inside the Green Zone.

No one claimed responsibility for the attack that took place after sunset when many Baghdad residents were indoors breaking their fast during the Muslim holy month of Ramadan.

Associated Press reporters on the east side of the Tigris River, opposite the Green Zone, heard an explosion, after which alert sirens sounded briefly in Baghdad.

Iraqi military spokesman Brig. Gen. Yahya Rasoul told The Associated Press that a Katyusha rocket fell near the statue of the Unknown Soldier, less than a mile from the U.S. Embassy. He said the military was investigating the cause but that the rocket was believed to have been fired from east Baghdad. The area is home to Iran-backed Shiite militias.

Shortly afterward the rocket launcher was discovered by security forces in the eastern neighborhood of Wihda, according to a security official who spoke on condition of anonymity because he was not authorized to speak to the media. The official also said the roads leading to the Green Zone were closed briefly for security reasons before they were reopened as normal.

Iraq’s state-run news agency said a Katyusha rocket crashed inside the Green Zone without causing any casualties. The U.S. military confirmed an explosion in the zone without saying what caused it, but said there were no American or coalition casualties.

As tensions escalate between the U.S. and Iran, there have been concerns that Baghdad could once again get caught in the middle, just as it is on the path to recovery. The country hosts more than 5,000 U.S. troops, and is home to powerful Iranian-backed militias, some of whom want those U.S. forces to leave.

American forces withdrew from Iraq in 2011 but returned in 2014 at the invitation of Iraq to help battle the Islamic State group after it seized vast areas in the north and west of the country, including Iraq’s second-largest city, Mosul. A U.S.-led coalition provided crucial air support as Iraqi forces regrouped and drove IS out in a costly three-year campaign. Iranian-backed militias fought alongside U.S.-backed Iraqi troops against IS, gaining outsized influence and power.

Now, amid an escalating conflict between the U.S. and Iran, Iraq is once again vulnerable to becoming caught up in the power play. An attack targeting U.S. interests in Iraq would be detrimental to the country’s recent efforts at recovering and reclaiming its status in the Arab world.

On May 8, U.S. Secretary of State Mike Pompeo made a previously unannounced trip to the Iraqi capital following the abrupt cancellation of a visit to Germany, and told Iraqi intelligence that the United States had been picking up intelligence that Iran is threatening American interests in the Middle East, although he offered no details according to two Iraqi officials.

A few days later, as U.S.-Iranian tensions continued to rise, the State Department ordered all non-essential, non-emergency government staff to leave the country.

Employees of energy giant ExxonMobil have also begun evacuating from an oil field in the southern Iraqi province of Basra.

On Sunday, Iraqi Oil Minister Thamer al-Ghadban said in a statement that he sent a letter to ExxonMobil asking for clarifications over the evacuation, saying the evacuation was because of “political tensions in the region” and not related to security.

He added that the evacuation of the oil giant’s foreign employees was “unacceptable and unjustified.” Al-Ghadban said he would be holding a meeting with ExxonMobil executives this week over the evacuation, adding that their departure was “temporary.”