Siquijor aims to become 1st province to regulate plastic use 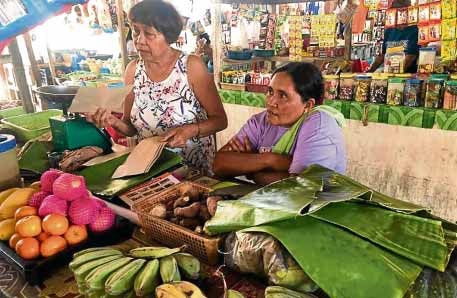 PLASTIC HOLIDAY The provincial government of Siquijor has designated Sundays as “plastic holidays,” when the sale and use of plastic bags are banned. —JHESSET O. ENANO

SIQUIJOR, SIQUIJOR, Philippines — Long associated with witchcraft, the country’s third-smallest province is now trying to break free from another curse: waste and plastic pollution as a result of a growing population and tourism boom.

The people in Siquijor province are attempting to get rid of the bewitching convenience of plastic.

In October 2018, the provincial government approved an ordinance that mandated an island-wide regulation of plastic use.

While it has so far changed some mindsets, government officials—in partnership with nongovernment groups—aim to take it one step further: to make Siquijor the first zero-waste island in the Philippines.

But that goal, beginning with the plastic bag regulation, would not come without birth pains.

Placing value on these single-use plastics would make the customers think twice before readily disposing them.

Sundays, however, were designated as “plastic holidays,” when the sale and use of plastic bags are banned.

Cle Bern Paglinawan, former provincial board member who authored the ordinance, said the implementation was no walk in the park.

While most vendors and buyers are already compliant, others, especially small vendors peddling fruits and snacks in tourist areas, still need to follow the ordinance.

Citation tickets are given to violators, who are required to attend orientations on their first offense.

In part, it was the closure of Boracay to tourists last year that raised awareness about the growing waste problem, said Enrique Belciña, supervisor of the provincial environment task force, which enforces the ordinance.

The impact of Boracay’s closure rippled to other tourist destinations, including Siquijor, which saw an influx of tourists.

Siquijor also feared that it may suffer the fate of the famed island-resort that President Duterte had called a “cesspool” before it was rehabilitated.

“We would tell businesses, if we don’t regulate our plastic use, we may end up like Boracay,” said Belciña, former deputy director of the provincial police who recently retired.

“We tell them: ‘What would happen to your livelihood?’ And they would understand why we do this,” he said.

Instead of using “sando” plastic bags, vendors would use paper bags or simply hand products to customers, who would be carrying their own “bayong” or woven bags or cloth bags.

While they understand the merits of the ordinance, some vendors feel the pinch brought by the change.

“These brown paper bags cost much more than the plastic bags,” said one vendor. “Our profits are lessened and we are having difficulty with the transition, but we can’t do anything about it.”

A hundred-piece bundle of paper bags, she said, cost around P80, quadruple the price of the same number of plastic bags.

To reduce expenses, some wrap goods in banana leaves.

The ordinance does not cover sachets and similar single-use packaging.

But government officials recognize that curbing these would be a matter that is out of their hands.

To realize this goal, Grate said alternatives would have to be found, materials recovery facilities established in all five municipalities and at-source segregation in every household encouraged.

“Looking at Siquijor five years ago and now, we can see that the different levels of government are not ready for rapid changes ushered in by its booming tourism sector—from its high demand for food importation [to] waste production,” he said.

Beginning July, the provincial government, in partnership with MEF, would be working for the next three years to make Siquijor the first zero-waste province, similar to the foundation’s successful efforts in the City of San Fernando in Pampanga province and certain barangays in Metro Manila.

Under the project, Grate said they hope not only to tackle Siquijor’s waste management, but also address food production as most of the island’s vegetables are imported from far-flung areas like Metro Manila and Baguio.

They also hope to tie their initiatives with the province’s tourism, job production and even social services.

Grate said with the plastic regulation in place, the phased implementation would allow the changing of habits that cannot simply be transformed overnight.

While big cities like those in Metro Manila are seen as major sources of garbage, islands with no waste management systems also contribute to pollution, Grate said.

So it is equally important to empower the local communities in the fight against waste, he said.

“The Philippines is often portrayed as a culprit, a major contributor of plastic pollution,” Grate said. “But it is important to see that this is also where solutions are happening.”

Read Next
Romualdez urges House to check compliance with PWD exemptions
EDITORS' PICK
UK’s Boris Johnson will resign, BBC reports
Unemployment rate up to 6% in May
Geek out at TOYCON 2022 powered by Smart Signature
High inflation: Your P1 is now worth only 87 centavos
High-risk pregnancy: Reducing your risk is in your hands
House energy committee chair Arroyo bats for cheap electricity
MOST READ
Suspect in grisly killing of missing woman in Bulacan arrested
Kim Atienza’s daughter flaunts bikini body in response to critics of her ‘revealing photos’
Japanese artist who created ‘Yu-Gi-Oh!’ found dead in the sea
FDA probes popular Filipino noodle brand for ‘high level of ethylene oxide’
Don't miss out on the latest news and information.