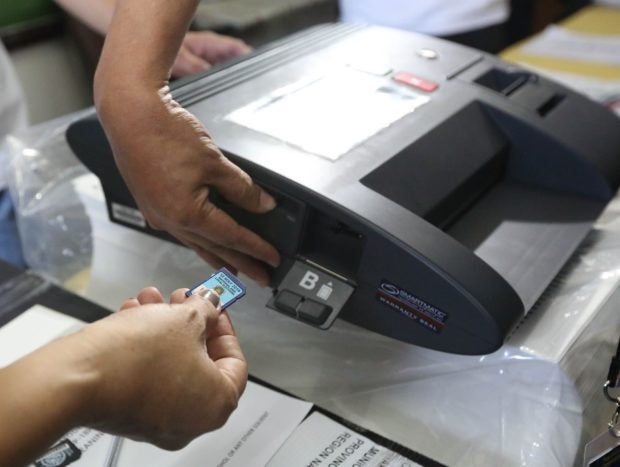 An SD card is inserted into a new vote counting machine at the San Jose Elementary School in Makati after a defective VCM delayed proceedings on Election Day on Monday, May 13, 2019. (Photo by MARIANNE BERMUDEZ / Philippine Daily Inquirer)

“The SD cards are corrupted, and the replacements have to come from our Santa Rosa warehouse, our hub. That’s why it took time because they had to ship the replacement SD cards,” Arabe said in a press briefing on Sunday.

Arabe said that if the SD cards had worked properly overseas COCs could have been transmitted by 6 p.m. (Philippine time) on Election Day, May 13.

She also noted that the supplier of the SD cards for the overseas voting was S1 Technologies Inc. and Silicon Valley Computer Group.

S1 Technology was also the one responsible for the 1,665 SD cards that malfunctioned during the midterm polls here in the Philippines.

The SD card contract was worth P22.6 million.

READ: Comelec exec: Supplier of SD cards should not be paid in full

The Comelec is considering imposing penalties on S1 Technologies for the glitch.

As of 7:20 p.m. of Sunday, the Comelec, sitting as the National Board of Canvassers, was still waiting for the COCs from Japan, Nigeria, Saudi Arabia, and Washington, DC, in the United States.

Comelec expects to finish the canvassing by Monday and proclaim the winners on Tuesday or on Wednesday.

Read Next
Comelec prefers full, not partial, proclamation of Senate winners
EDITORS' PICK
House energy committee chair Arroyo bats for cheap electricity
Why Tagle is a leading papal contender
KWF has no power to ban, censor written works – Lagman
Powered by style, innovation and passion
A laptop that maximizes your WiFi so you can maximize your productivity
In Borongan, nuns play hoops (not mahjong)
MOST READ
Why Tagle is a leading papal contender
Zubiri on SRA mess: Shameful, disgusting
SRA officials should resign after ‘illegal sugar order’ – Zubiri
Arjo Atayde reveals proposal to Maine Mendoza was ‘more than a year’ in the making
Don't miss out on the latest news and information.