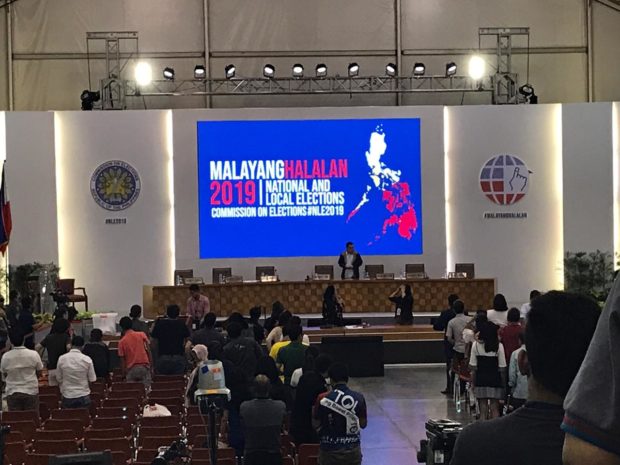 The Commission on Elections (Comelec), sitting as the National Board of Canvassers (NBOC), resumed its canvassing of votes for the 2019 May midterm polls. (Photo by CONSUELO MARQUEZ / INQUIRER.net)

MANILA, Philippines — The Commission on Elections (Comelec) should be held responsible for the mishaps in the 2019 May mid-term polls, the National Citizens’ Movement for Free Elections (Namfrel) said on Saturday.

“The unfortunate thing about the multiple mishaps in the May 13 elections is that the problems were preventable,” the group said in a statement where it enumerated its preliminary findings and observations on the elections.

One problem that Namfrel pointed out was the Comelec’s failure to distribute voter information sheets a month before the polls, which was due to “printing error.”

“A question that begs an answer is, who committed the printing error?” Namfrel asked. “The industry practice is that the printer gets the final approval of the client before it proceeds with the final printing.”

“The low quality of ballot paper and/or marking pens caused bleed-through as voters were marking their ballot,” Namfrel added as part of their observation. “It may have caused some machines to malfunction because the ink took some time to dry.”

Namfrel commended the poll body, however, for some things:

But despite all the good points, Namfrel said: “The May 13, 2019 midterm elections is the fourth time that the automated elections systems was used. For all these problems, the Comelec should be held responsible.”