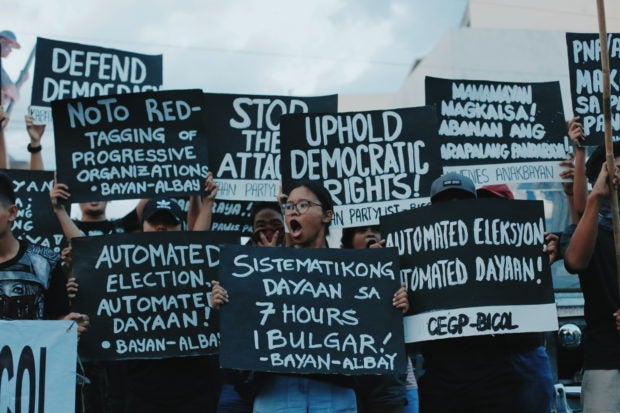 Militants gather at the Pinaglabanan Monument in Legazpi City on May 17, 2019 to call for transparency and protest the conduct of the elections. PHOTOS by George Gio Brondial/Inquirer Southern Luzon

LEGAZPI CITY, Philippines — Some 70 militants from different sectors here and in Naga City in Camarines Sur province expressed their indignation on Friday over the conduct of the 2019 midterm elections.

The “Black Friday” protests were held to call for transparency in the election results and to express displeasure on the alleged red-tagging of party-lists by authorities, according to Guia Purawan, Albay coordinator for Kabataan Partylist.

During the elections on Monday, posters that tagged Kabataan, Bayan Muna, Gabriela, and Anakpawis, and their nominees and former nominees to the New People’s Army were seen.

On election day, defective SD cards used in vote counting machines (VCMs), the delay in the transmission of votes for seven hours in some areas, and slow municipal and provincial canvassing cast doubt on the integrity of the election results, Purawan said.

In its social media account, Kabataan Bicol said  the government only proved that they are using the elections as its machinery to maintain the status quo.

The Black Friday protest was a kick-off to a series of demonstrations to be conducted in the coming days, College Editors Guild of the Philippines Executive Vice President Jhoan Villanueva said in an interview.

“We want to tell Filipinos that there was cheating during the elections and we want to include them in our fight,” she said.

Meanwhile, according to the Concerned Drivers and Operators-Pinagkaisang Samahan ng mga Tsuper at Operator Nationwide (Condor-Piston), the VCMs were used to prevent progressive groups from getting congressional seats.

“What happened to the VCMs were the workings of the elitists so that progressive groups can’t enter Congress,” said Ramon Rescovilla, Piston Vice President. (Editor: Eden Estopace)