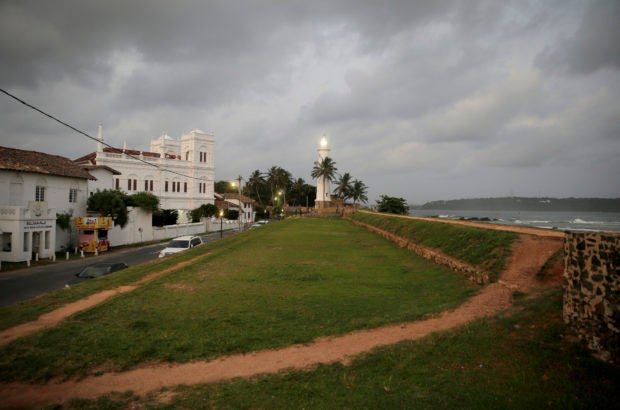 The 17th century built Dutch fort, which was a popular tourist site, stands empty in Galle, Sri Lanka. Sri Lanka was the Lonely Planet guide’s top travel destination for 2019, but since the Easter Sunday attacks on churches and luxury hotels, foreign tourists have fled. More than 250 people, including 45 foreigners mainly from China, India, U.S. and the U.K., died in the Islamic State group-claimed blasts. Image: AP/Eranga Jayawardena

“Bomb blasts can happen anywhere, anytime,” he said, adding that he was not afraid. “Sri Lanka is an amazing country. This is my first visit and I will tell my friends also to come.” 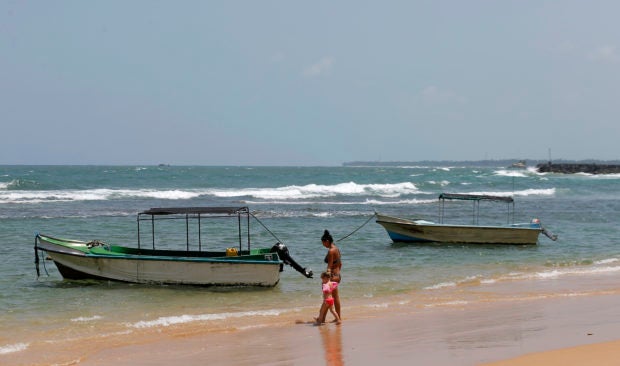 A Ukrainian woman and a child walk past glass bottom boats, used for watching coral reefs, on a beach in Hikkaduwa, Sri Lanka. Image: AP/Eranga Jayawardena

His is a lone voice and presence. Sri Lanka was the Lonely Planet guide’s top travel destination for 2019, but since the Easter Sunday attacks on churches and luxury hotels, foreign tourists have fled.

Many of those booked to come in the next few months have canceled. Hotel occupancy across the island has plummeted by 85% to 90%. The tropical beaches, restaurants and shops are empty. 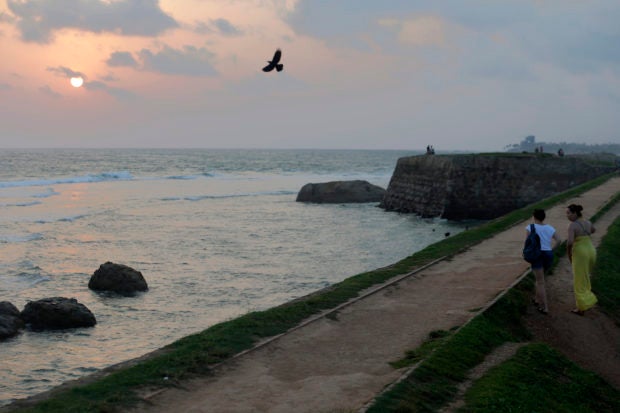 The coordinated suicide bombings on April 21 not only destroyed lives but also wiped out the livelihoods of Sri Lankans who depend on tourism. 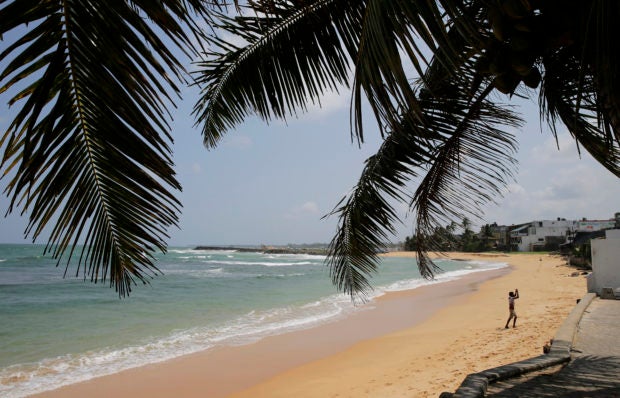 A boy walks on a beach in Hikkaduwa, Sri Lanka. Image: AP/Eranga Jayawardena

Tourists normally come to Hikkaduwa, in the southwest, for the strong waves that are perfect for surfing and sparkling clear waters made for snorkeling. Today, very few of the 27 hotels are open. Most, along with the eateries that line the 6-kilometer stretch of palm-fringed beach, are closed.

Among the few hotels still open is Hikkaduwa Beach Hotel. On April 21, all 50 rooms were occupied. Today, only a handful of rooms.

“It’s a real disaster. We don’t know what to do right now,” said Sanjeewani Yogarajah, an executive with the hotel. She said the attack has cost the hotel 5.5 million Sri Lankan rupees (P1,637,886), forcing the hotel’s management to send half the staff home. 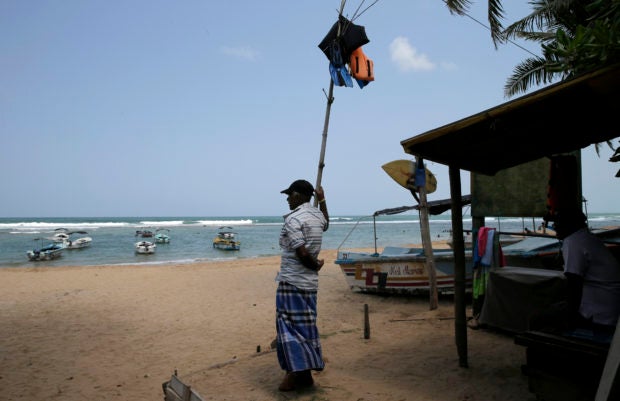 Some tourism officials said the damage to the industry after the bombings are worse than during the 26-year civil war between the Liberation Tigers of Tamil Eelam and the government which ended a decade ago. At least then, the violence was mostly contained to the north of Sri Lanka. This time, no part of the island has remained untouched by the blasts.

Lankesha Ponnamperuma, general manager of hotel chain Hikka Tranz, is one of the luckier ones. While most hotels report wholesale cancellations, he is surviving thanks to business from local residents. Last Friday, May 10, two-thirds of the 150 rooms were booked, mostly by domestic tourists.

“I haven’t sacked anyone yet. Instead, we are training our people to adjust their expenditure and helping them restructure their bank loans,” Ponnamperuma stated. 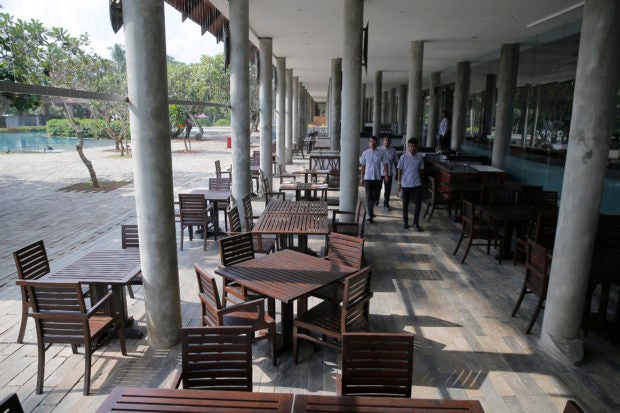 “Such a strategy won’t solve the problem,” he admitted, but will “help at least to keep the hotels going.” 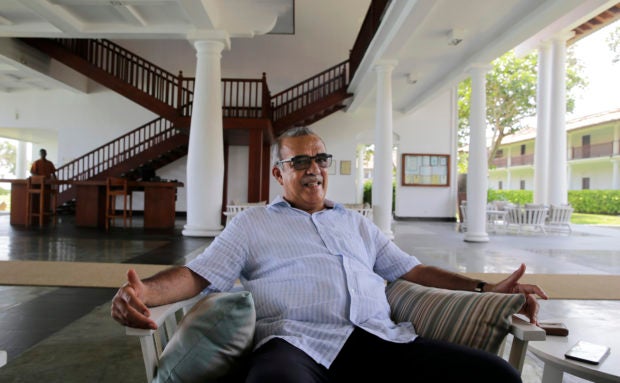 The manager of a clothing shop shared the owner had shut the group’s other two shops and the factory too. “Business collapsed after April 21,” Kumari said, who declined to give her surname.

According to government figures, there has been an 80% drop in arrivals since the attack. Tourism accounts for 4.9% of Sri Lanka’s GDP. Last year, 2.3 million tourists visited the island, generating $4.4 billion in revenues, a nearly 12% jump from 2017. Around half a million Sri Lankans directly depend on tourism while 2 million depend on it indirectly. 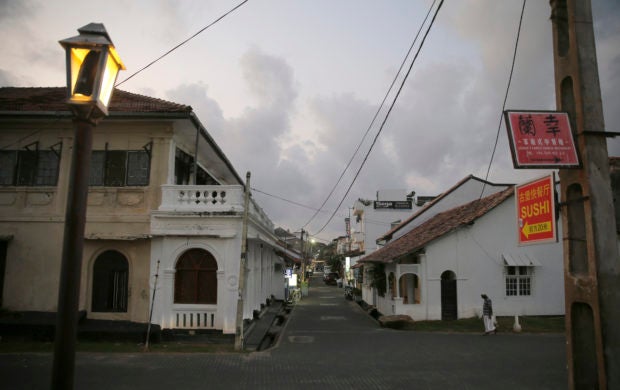 A street that is usually crowded with tourists is seen empty in Galle, Sri Lanka. Image: AP/Eranga Jayawardena

One of them is Mohomed Musflick, the owner of a souvenir shop in Galle full of wood carvings, local paintings and postcards. “I have not sold one item. There are no tourists and we are in a huge crisis,” he said. 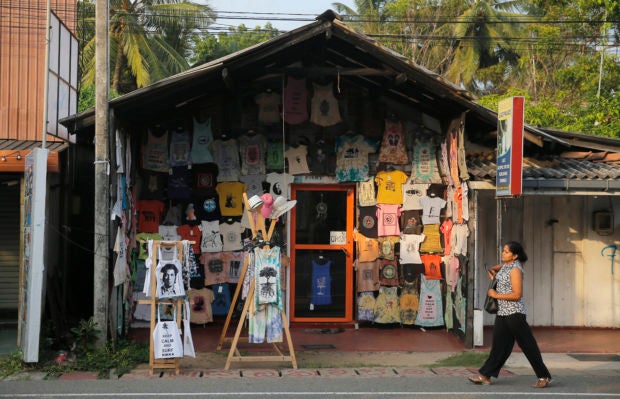 While life is gradually returning to normal on the island with offices and schools re-opening, the tourism industry is in a somber mood over the slump in foreign tourists. Tour operators from Russia, Norway and Great Britain have canceled bookings going right up to April 2020.

A travel ban issued by nearly a dozen countries is the greatest cause for concern. “The ban is our main worry. Until it is removed or softened, we can’t start our marketing to attract tourists. If it is lifted soon, we are hopeful we can bounce back this year or otherwise definitely next year for sure,” Yogarajah stated.

In the meantime, Sri Lanka’s government should target “people and countries resilient to this kind of attacks and situations, such as Russia, Israel and India,” said Anusha Frydman, managing director of the Lavanga Resort and Spa. 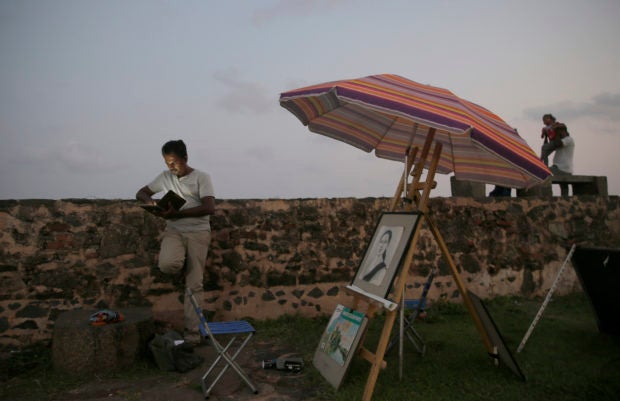 The industry is clear about what else it wants from the authorities. Ensure that stringent security measures are in place to reassure potential visitors, persuade politicians to put their differences aside, adopt a bipartisan approach on national security and work fast to get the travel ban lifted.

To help the industry cope, the government has put together a relief package comprising easy loans at special rates and reduced taxes. The government also plans to formulate a $100 million insurance fund for compensation to any tourist injured or killed while visiting the island. 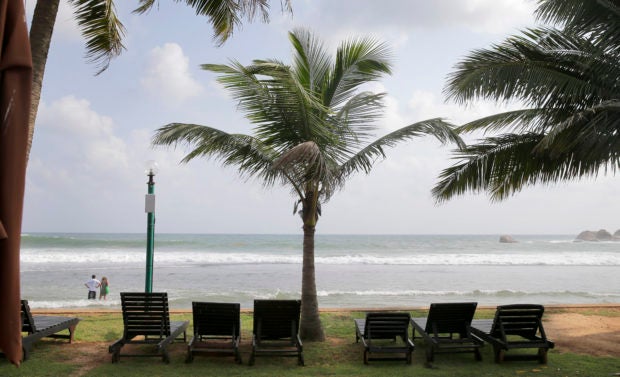 “In the past, we have had many serious crises and we have recovered. I am quite positive we can do it again,” Jan van Twest said, general manager of the Fortress Resort and Spa near Galle, where 750 room nights have been canceled from May to October.

“But we need to recover, recover very fast,” he persuaded. HM/JB

After grief and chaos, picture of Sri Lanka bombers emerges