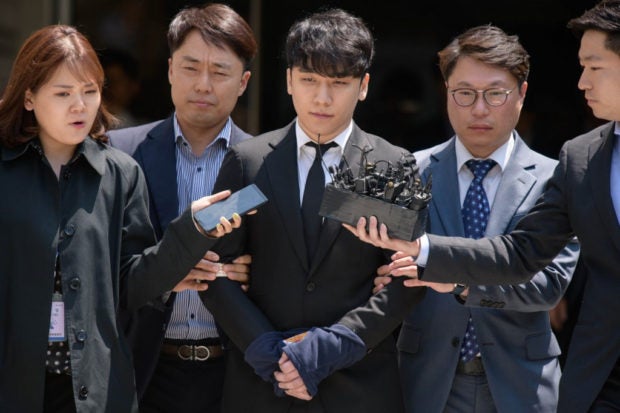 A South Korean court on Tuesday, May 14, refused to issue an arrest warrant against K-pop star Seungri over charges including prostitution in a snowballing sex scandal, Yonhap News Agency reported.

The 28-year-old singer from popular boy band Big Bang and his business partner are accused of arranging sex services for potential investors and rich clients at a nightclub owned by the pair.

Seoul Central District Court said there was “room for dispute” over his alleged embezzlement and that there was little concern that he could destroy evidence, the South Korean news agency said.

Earlier in the day, Seungri, whose real name is Lee Seunghyun, attended a court hearing over the allegations.

He later left the building, his hands cuffed and covered with a cloth, to be taken to a nearby detention center to await the court’s decision.

Yonhap News Agency added that police investigators alleged that Seungri and his partner procured a dozen prostitutes for a group of Japanese investors in 2015 at their upmarket Burning Sun nightclub.

The pair are also accused of embezzling around 530 million won ($450,000) from the business and face charges of violating sanitary codes at the club, where drug peddling was allegedly commonplace and women are said to have been regularly raped.

Seungri, who announced his retirement from the Korean entertainment industry in March as the scandal ballooned, has denied the charges.

Other stars have been embroiled in the allegations, which have cast a shadow over the K-pop industry after investigations into Seungri revealed an online chatroom where a handful of male celebrities shared illegally filmed sex videos.

Singer, songwriter Jung Joonyoung, who ran the chatroom, was arrested in March after admitting to filming himself having sex and sharing the footage without his partners’ consent.

A member of boy band FT Island was arrested earlier this month while another figure has announced his retirement from the entertainment industry amid an ongoing probe. HM/JB

Prostitution and ‘molka’: A timeline of the K-pop sex scandals