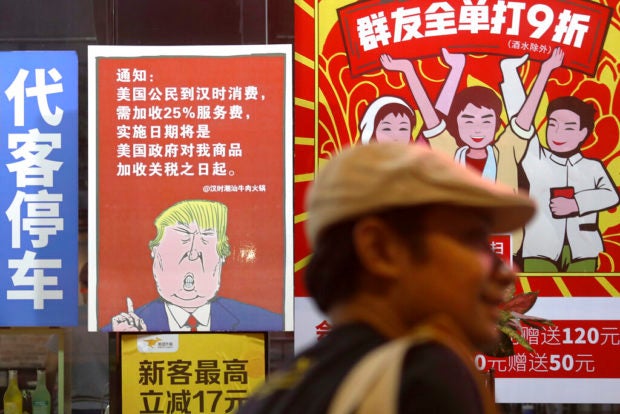 In this Aug. 13, 2018 file photo, a man walks by a poster depicting a mural of US President Donald Trump stating that all American costumers will be charged 25 percent more than others starting from the day president Trump started the trade war against China, on display outside a restaurant in Guangzhou in south China’s Guangdong province. AP

BEIJING — What do tilapia, Jane Austen and Chinese revolutionary poster art have in common?

All have been used to rally public support around China’s position in its trade dispute with the US, as the ruling Communist Party takes a more aggressive approach — projecting stability and stirring up nationalistic sentiment in the process.

“If you want to negotiate, the door is open,” anchor Kang Hui said Monday on state broadcaster CCTV. “If you want a trade war,” however, he added, “we’ll fight you until the end.”

“After 5,000 years of wind and rain, what hasn’t the Chinese nation weathered?” Kang said.

The toughly-worded monologue on the banner evening news program followed days of muted official responses to President Donald Trump’s decision to hike tariffs on $200 billion worth of Chinese imports. Trump startled financial markets with his May 5 announcement that US. tariffs would rise to 25% from 10% as of Friday.

After negotiations in Washington ended last week with no agreement, China retaliated Monday with higher tariffs on $60 billion worth of American goods, raising duties of 5% to 25%.

“Overnight, we saw official media — in the People’s Daily, China Daily, CCTV — all run spots about the United States as being a problematic negotiating partner,” said Jake Parker, vice president of China operations for the US-China Business Council.

President Xi Jinping, the ruling party’s most powerful leader in decades, has made China’s foreign policy more assertive while nurturing the growth of a red-blooded but tightly controlled nationalism.

The approach reflects a new willingness to allow a shift in domestic public opinion where the trade war is concerned, Parker said.

Internet users shared patriotic memes expressing confidence in China’s economy and contempt for the U.S. The commentary echoes earlier times when the US and China were adversaries in the Korean War and for decades afterward.

“All the trade wars are paper tigers,” said a riff on a Communist propaganda poster showing People’s Liberation Army soldiers stamping on a pile of skulls. The poster alludes to Mao Zedong’s famous pronouncement that “All reactionaries are paper tigers” — a derogatory term which he also applied to American imperialism.

Still, the nationalistic bent of social media comment is a poor measure of Chinese public opinion. In the past, the government has paid people to publish posts supporting party policies, and any expression of dissent faces strict censorship. One Weibo post simply asked what impact the trade war will have on ordinary people. A counter at the bottom of the post indicated that it had 1,290 comments, but none were viewable, and further comments were “prohibited.”

A number of Chinese exporters contacted by The Associated Press refused to comment on the record because they fear government retribution.

Beijing is trying to reassure worried Chinese businesses and consumers that the country is strong enough to withstand the trade conflict.

“I think this administration is different from previous ones in its diplomatic policies,” said Li Chanjuan, a manager at an insurance company. “People expect the government to make a tougher gesture.”

There are limits to how far the party will go in pushing public sentiment.

David Bandurski, a co-director of the University of Hong Kong’s China Media Project, said the country’s current aim is to promote stability rather than foment patriotic fervor.

“China is keen to project calm,” he said. “The last thing it needs or wants is to whip up popular anger, which can turn quickly,” sometimes in ways that the party can neither predict nor control.

People’s Daily, the party’s official mouthpiece, called the trade war “no big deal.” It also paid tribute to Jane Austen’s famed novel “Pride and Prejudice” in a tongue-in-cheek critique of the Trump administration.

CCTV on Wednesday aired interviews with both Chinese and American economists who condemned the U.S.’s approach. The state broadcaster also emphasized how the tariffs will hurt American consumers.

Meanwhile, the Hainan Tilapia Sustainability Alliance, an industry group on the southern island province, is appealing to Chinese taste buds.

China’s exports of the popular fish are a target of Trump’s tariffs.

In an article calling for Chinese consumers to eat more tilapia to help the industry survive, the group said: “There’s no problem that eating cannot solve.”