MANILA, Philippines — The Philippine National Police (PNP) has confiscated a total of P12,208,958 in operations against vote buying nationwide as of Tuesday.

Data released by the PNP on Wednesday showed that it has received 225 reports of alleged vote buying and has recorded 449 violators, of which 356 were already accosted while eight minors were rescued.

Police recorded the largest amount of cash in the Caraga Region, where P7.9 million was confiscated in nine reported incidents.

This was followed by Northern Mindanao, where over P1 milllion was confiscated in nine reported incidents; Ilocos Region (P561,000 in 17 reported cases); Metro Manila (P541,100 in nine incidents); and in the Bicol Region (P449,080 in 16 incidents).

In a press briefing Tuesday, PNP chief Police Gen. Oscar Albayalde said he agrees with the pronouncement of President Rodrigo Duterte that vote buying has become part of the voting culture in the Philippines.

“If it is a culture, it is a way of life. Hopefully, maputol natin ‘yan dahil hindi ito magandang practice (Hopefully, it will be stopped because it is not a good practice),” Albayalde said.

Below is the data from the PNP, showing the number of reported incidents of vote buying in different regions. 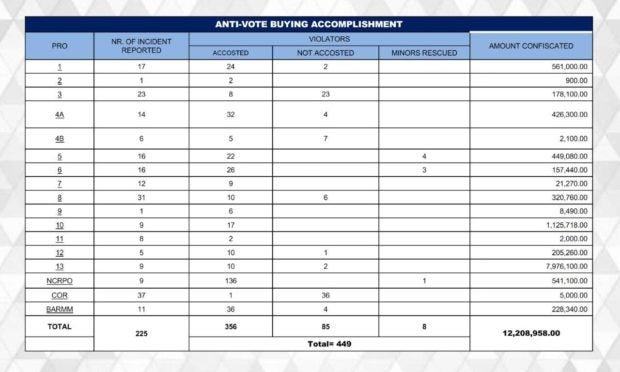