Admiral: US hasn’t stepped up sea patrols to confront China

SINGAPORE – A top U.S. admiral said Wednesday the Navy has not stepped up maritime patrols to challenge China’s sweeping territorial claims in the South China Sea but is maintaining a “consistent” presence in the disputed waters.

Chief of Naval Operations Adm. John Richardson, addressing an international security conference in Singapore, sought to reassure regional partners, some of whom have opposing claims in the waters but benefit from good relations with China on other fronts. 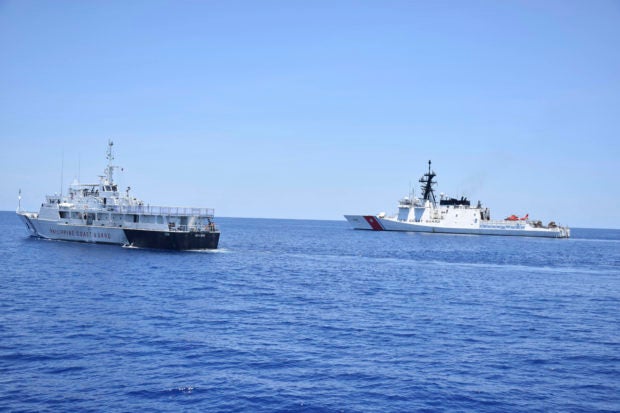 “I’ve done the analysis so that I can state with confidence that our level of operations, our presence there, has been consistent over the decades,” Richardson said. “There’s nothing that has spiked recently.”

The International Maritime Security Conference was attended by representatives from 33 navies, including 16 navy chiefs. A Chinese delegate was also present.

China has built military installations on seven man-made islands in the crucial waterways it claims on historical grounds.

The other claimants, most notably the Philippines and Vietnam, have protested China’s behavior but they also maintain good relations with Beijing.

They usually involve a U.S. vessel sailing within an island’s coastal waters without prior notification and draw sharp rebukes from China, which claims the South China Sea virtually in its entirety.

“This is not a zero-sum game. There is tremendous prosperity to be gained out there for all, and so we’ll strive to do so in a way that everyone can grow,” Richardson said. 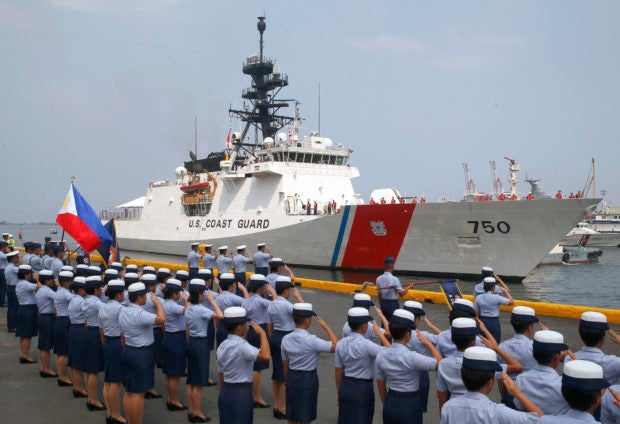 Philippine Coast Guard personnel salute to welcome the U.S. Coast Guard National Security Cutter Bertholf (WMSL 750) as it arrives for a port call in the first visit by a U.S. cutter in over seven years, Wednesday, May 15, 2019 in Manila, Philippines. Capt. John Driscoll, commanding officer of the Bertholf, told reporters that two Chinese Coast Guard ships were spotted off the South China Sea while they were conducting a joint exercise with Philippine Coast Guard. (AP Photo/Bullit Marquez)

Capt. John Driscoll, commanding officer of the U.S. Coast Guard Cutter Bertholf, told reporters during a port call in Manila that two Chinese coast guard ships were spotted in the vicinity of the exercise.

China is building naval vessels at a rate outpacing its rivals, including the U.S, and its missile destroyers and nuclear attack submarines are equipped with increasingly lethal weaponry.

Its first domestically built aircraft carrier is set to enter service, with more believed to be in the works.

Richardson said China appears to be “early” in the process of constructing and operating aircraft carriers, but the U.S. is watching it “very closely”.

“I just have a great deal of respect for how fast things can happen when it comes to China,” he said.