MANILA, Philippines – More than 168 tons of discarded campaign materials have so far been collected in Metro Manila by the Metropolitan Manila Development Authority (MMDA).

The election-related tarpaulins, the MMDA said, will be made available to recyclers and those interested in transforming the materials to bags, mats and other items. 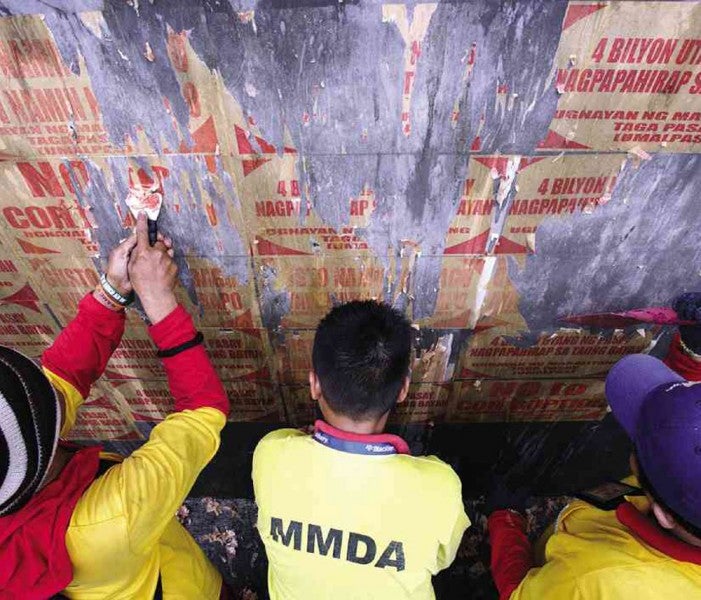 The collected tarpaulins are temporarily stored at the MMDA satellite offices under the Nagtahan and Santolan flyovers.

A day after the May 13 elections alone, the MMDA said it has gathered 23 tons of campaign materials, filling up seven dump trucks.

Another 145 tons have been taken down, confiscated and collected before and during the official campaign period under “Oplan Baklas,” which started on March 1.

“All in all, we have collected so far 168.84 tons of campaign trash this midterm elections,” Martinez said.

He noted that this year’s collection is less than the 206 tons collected during the 2016 presidential elections.

In taking down election-related materials, the MMDA said its clearing operations teams used scrapers and sprayers to scratch out those pasted on concrete walls and fences in major thoroughfares.

“We target to rid the major roads in the Metro of campaign materials and spruce up public schools until this week so the public can prepare for the opening of classes next month early,” said MMDA Chairman Danilo Lim said in statement.  (Editor: Gilbert S. Gaviola)