Taiwan gay couples plan weddings even as opponents fight back 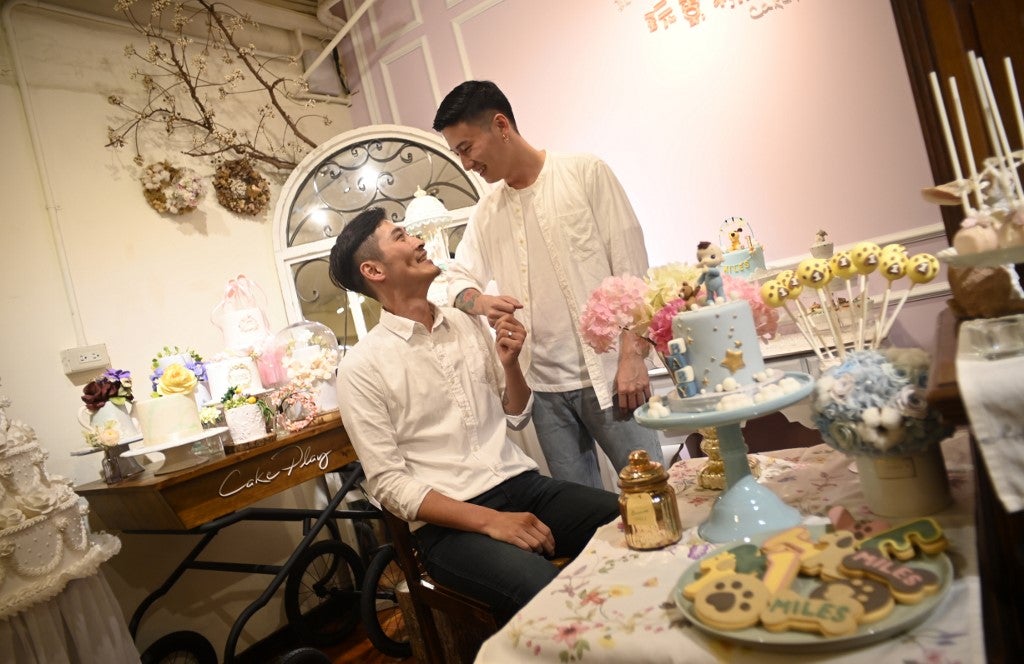 This picture taken on May 7, 2019 shows cake maker Shane Lin (L) and his lover Marc Yuan posing for a photo during an interview at their workshop Cake Play in Taipei. (Photo by SAM YEH / AFP) / TO GO WITH STORY: Taiwan-politics-rights-gay-marriage, FOCUS by Amber Wang

TAIPEI — At the cake shop they run in Taipei, Shane Lin and Marc Yuan are planning their upcoming wedding as they expectantly await Asia’s first gay marriage law — but a last-minute push by conservatives could scupper their dreams.

The pair, who met and fell in love at college, are among hundreds of same-sex couples who have made reservations to register with government agencies on May 24 for what they hope will be a marriage.

That is the deadline set by Taiwan’s top court to allow same-sex couples to legally wed.

In a landmark 2017 ruling, judges said denying gay couples the right to marry violated the island’s constitution. The court gave lawmakers two years to make marriage equality happen or see it enacted automatically if they failed — a move that promises a new milestone for Asia.

For gay couples like Lin, 31, and Yuan, 30 — who decided to tie the knot as they celebrated their tenth anniversary — the ruling allowed them to start planning for their big day.

“Taiwan may often be overlooked internationally but the things we have done are visionary and with purpose, which we can be proud of,” said Lin, referring to the ruling.

Yet with less than a fortnight to go, Taiwan’s LGBT community still don’t know what marriage equality will look like because the legislation has yet to be conclusively decided.

Gay rights groups hoped the government would simply amend the civil code marriage clauses to include homosexual couples, a move they said would grant the truest form of equality.

Opponents mobilized and organized a series of referendums in November, in which voters comprehensively rejected defining marriage as anything other than a union between a man and a woman, weakening the government’s legislative hand.

The fight for same-sex marriage has finally landed in the legislature where, on Friday, three rival bills will be voted on just a week before the deadline.

The most progressive bill — which most gay rights groups have begrudgingly backed — is the government’s. It is the only one to use the word “marriage” and offer some limited adoption rights.

Conservatives have tabled two other versions which noticeably avoid the word marriage, and offer something closer to same-sex unions with no adoption rights.

The most conservative version even enabled close relatives to legally challenge a union — although that clause was withdrawn earlier this week following an outcry.

“When it comes to equality and human rights, everyone should be the same. Why should our marriage be given a different name?” said Lin.

The ruling DPP holds a comfortable majority but no-one knows which way the voting will go, especially given elections are just eight months away.

On Tuesday, President Tsai urged people to back her government’s bill, saying it respected both the court’s judgement and the referendum.

“You will have more problems in life when you don’t have your basic rights. That’s why in same-sex marriage, we are striving for equality and same rights as everyone else,” Huang said.

The couple, both engineers aged 28, got together shortly after the 2017 ruling. Following a whirlwind romance, they agreed to marry six months in.

They plan to register on May 24th and host a wedding banquet in September.

For Lin and Yuan, adoption and surrogacy are also pressing issues: they hope to have one biological child and one adopted child.

“We hope that Taiwan can quickly enact a law to allow surrogacy. Another thing which is most important is that we can have the same rights and privileges as heterosexual couples in adoption,” Lin said.

The government’s bill only allows gay couples to adopt the biological children of their partner. The other bills only grant limited guardianship rights for existing children.

In the last decade, Taiwan has been one of the most progressive societies in Asia when it comes to gay rights, staging the continent’s biggest annual gay pride parade.

But the island remains a staunchly conservative place, especially outside urban areas.

Yuan, who described being attacked at school for his “feminine” demeanor, said he remains hopeful “things will get better and better”.

“I believe Taiwan will keep progressing and there will be more amendments in the future to make the gay marriage law better,” he said.