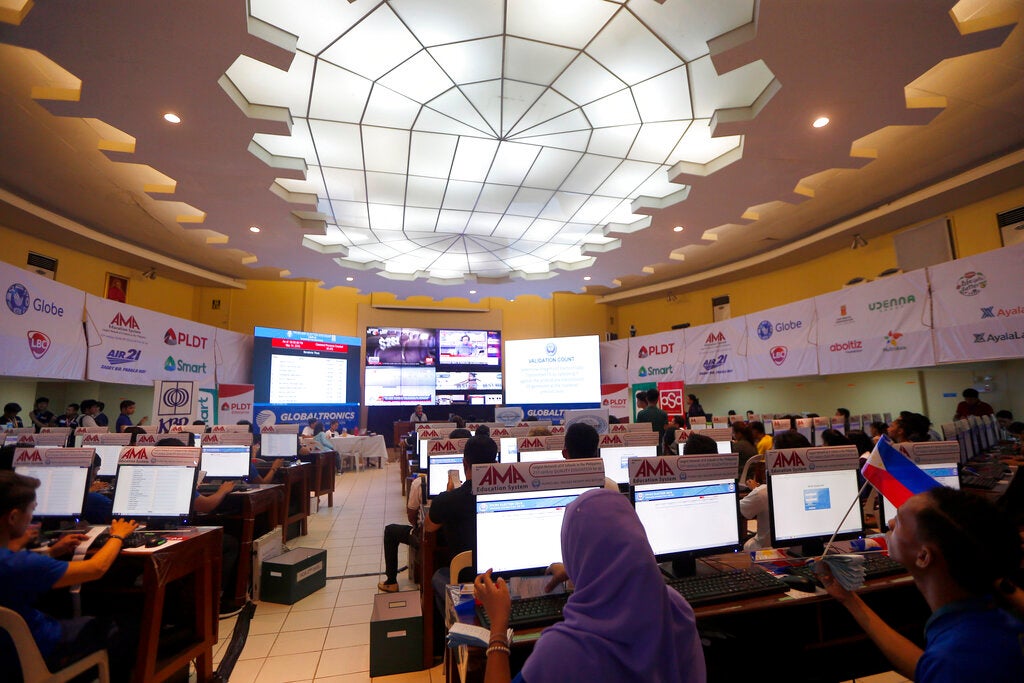 Volunteers of the Parish Pastoral Council for Responsible Voting  wave Philippine flags to seek assistance during the unofficial tally of votes at Monday’s midterm elections Tuesday, May 14, 2019 in Pasay City. (AP)

Locsin said Monday’s vote is seen as a gauge of public support for Duterte’s war on drugs.

“The elections were a referendum on Duterte and his war on drugs. He & the war just won,” he said in a Twitter post.

He added: “The Senatorial elections were not a referendum in favor of Charter change either, the death penalty, and jailing minors.”

He said the public should already “shut up” on the matter as the drug war “goes on.”

“So shut the f*** up on that subject everybody. The war goes on,” the foreign secretary said.

In the latest update of partial and unofficial tally of votes from the Parish Pastoral Council for Responsible Voting (PPCRV), at least eight candidates endorsed by the President led the race for 12 Senate seats.

Earlier, opposition senatorial candidates believed that the result of the midterm elections is a “referendum on the Duterte administration.”

Duterte, who has shown little tolerance for critics, especially those who question his anti-drug campaign, aimed for stronger leverage in the traditionally more independent Senate to bolster his legislative agenda.

That includes the return of the death penalty, lowering the age for criminal liability below the current 15, and revising the country’s 1987 Constitution primarily to allow a shift to a federal form of government, a proposal some critics fear may be a cover to remove term limits.

The handful of incumbent opposition senators whose seats were not up for election could potentially get backing from leading independent aspirants to veto Duterte’s emerging majority in the upper chamber. At least seven senators are needed to block any proposal by Duterte’s camp to revise the Constitution, which was passed with anti-dictatorial safeguards in 1987, a year after Marcos was ousted by an army-backed “people power” revolt.

Opposition aspirants consider the Senate the last bastion of checks and balances given the solid dominance of Duterte’s loyalists in the lower House of Representatives.

Voters in Monday’s elections made their choices for 18,000 congressional and local posts, including 81 governors, 1,634 mayors and more than 13,500 city and town councilors in 81 provinces. With a report from Associated Press