Did Sara Duterte’s Hugpong deliver? Yes and no 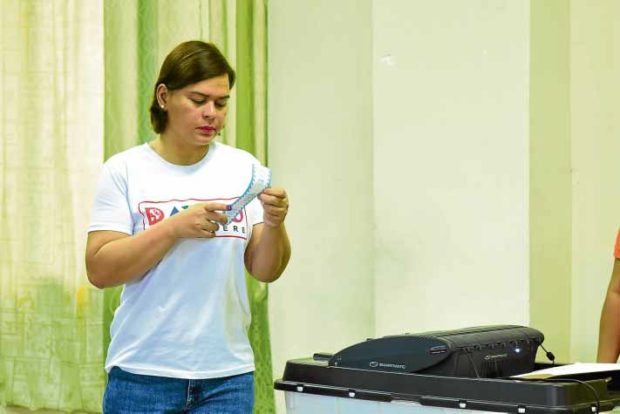 DAVAO CITY, Philippines — It was deemed a superparty.

The provinces of Davao City and Davao del Sur delivered 12-0 in favor of the candidates of HNP and PDP-Laban led by Bong Go and former Philippine National Police chief Bato dela Rosa. Only former journalist Jiggy Manicad lost among the superparty’s 13-member team.

HNP is now basking in the victory of its senatorial candidates and of the Duterte children and allies in Davao City.
But it suffered a debacle in the local elections, with its endorsed candidates losing in Davao del Norte and Davao del Sur, which are largely considered an extension of the Dutertes’ turf and whose leaders were, along with Sara Duterte, among the founding members of HNP.

Political powerhouses in the Davao region whom many thought were indestructible—Antonio “Tonyboy” Floirendo in Davao del Norte’s second district and the Del Rosarios in Davao del Norte—crumbled in the face of the group led by another Duterte ally, former House Speaker Pantaleon Alvarez.

In Davao City, Sara Duterte won reelection with a partial 570,731 votes against the 4,192 votes of her independent opponent, Jun Marcellones.

Her brother Sebastian Duterte, also from HNP, will make his political debut as vice mayor, having run unopposed with 548,729 votes.

In Davao Occidental, brothers Claude and Franklin Bautista ran unopposed under HNP for governor and vice governor. The candidate for the lone-district representative, Lorna Bandigan, is from the Nationalist People’s Coalition (NPC).

But HNP lost steam in Davao del Sur, where the Cagas family (NP) dominated the governor, vice governor and Congress.

HNP candidates were also dealt defeat by PDP candidates in Davao del Norte led by former Speaker Alvarez. The post of governor was won by Edwin Jubahib, and of the vice governor, by Rey Uy.

The victory of Alvarez, Dujali and Jubahib ended the rule of two of the most powerful political clans in Davao — the Del Rosarios and the Floirendos.

Led by Sara Duterte, HNP had its first general assembly in February 2018, which was attended by at least 500 public officials including governors, vice governors, board members, mayors, vice mayors and councilors.

As a regional structure, HNP started a massive three-month campaign that brought it across the country starting from Luzon, the islands of the Visayas, and ended in Davao City.

The campaign rallies, 73 in all, focused on promoting not only the administration’s senatorial candidates, but also party list groups and local politicians at each stop.

The regional party also forged and signed alliances with other local parties, creating a semi-informal but effective political machinery.

But the postelection question now is: What’s next for HNP and its chair Sara Duterte? —With reports from Mart Sambalud and Orlando Dinoy