Bam in Magic 12 in early Comelec count but how long can he hang on?
Close
menu
search

Bam in Magic 12 in early Comelec count but how long can he hang on? 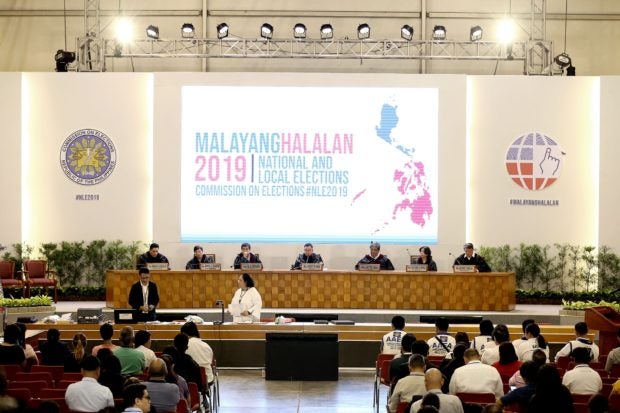 About an hour before the polls closed on Monday, the Commission on Elections convened at the Philippine International Convention Center to serve as the National Board of Canvassers for the 2019 midterm elections. (File photo by RICHARD A. REYES / Philippine Daily Inquirer)

MANILA, Philippines — Sen. Bam Aquino, an opposition candidate, broke into the so-called Magic 12, even as his fellow re-electionists Senators Cynthia Villar and Grace Poe remained the top contenders in the senatorial race, according to the first batch of partial and official results from the Commission on Elections (Comelec).

The Comelec, sitting as the National Board of Canvassers, has so far canvassed transmitted results from 34 certificates of canvass (COCs) as of 9 p.m.

Aquino is 14th in PPCRV tally

As of this writing, Aquino was in the 14th spot in the partial unofficial tally from the Parish Pastoral Council for Responsible Voting (PPCRV) transparency server.

The transparency server of the PPCRV, one of Comelec’s citizens’ arms, receives results transmitted from the vote-counting machines.

According to Comelec Chairman Sheriff Abas, the tally being shown to poll watchdogs like PPCRV, as well as the media, through the transparency server was only partial and unofficial.

“The basis for the partial and unofficial tally of votes is the transparency server. The official tally will come from our canvassing now. Monitor it closely because that will be the official result,” Abas, speaking in Filipino, said before Tuesday’s session resumed.

The NBOC convened on Monday at around 4:30 p.m. to start the canvassing of votes for the midterm elections but later adjourned its session at 5:25 p.m.

READ: National Board of Canvassers adjourns session Monday as it await poll results

The canvassing of votes resumed at 2 p.m. on Tuesday.