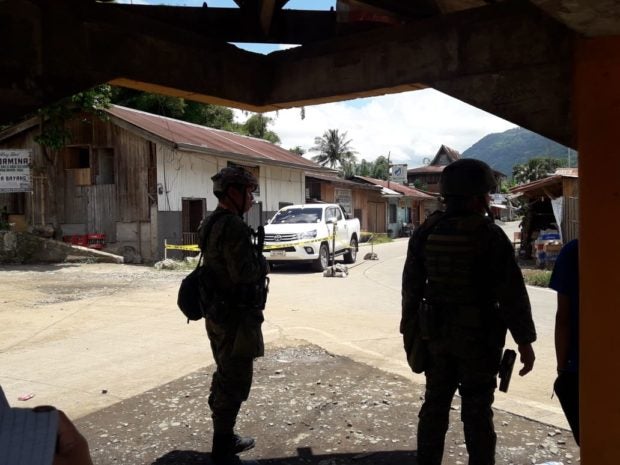 The site of the gunfight between two rival clans in Ganassi, Lanao del Sur on May 13, 2019. PHOTO by Divine M. Susan/ Inquirer Mindanao

The Guro family was on the way home to Marawi City after voting in Lumbaca Unayan town when they passed by Barangay Poblacion where supporters of incumbent Mayor Al-Rashid Macapodi were exchanging gunfire with supporters of his rival, Amano Balindong.

“They made a U-turn so that they won’t get hit, but they were followed and shot,” Lt. Jose Ganzan, operations officer of 55th Infantry Battalion, said in an interview. “It was the children seated at the back who had gunshot wounds.”

The victims were brought to a hospital in nearby Binidayan town but were later transferred to the Amai Pakpak Medical Center in Marawi City.

Earlier, a 20-year-old poll watcher and a relative of Macapodi was allegedly shot by what Macapodi’s group believed were relatives of Balindong.

Police Captain William Dagondon, chief of Ganassi municipal police, said he did not expect the incident to happen on a peaceful election day. (Editor: Eden Estopace)