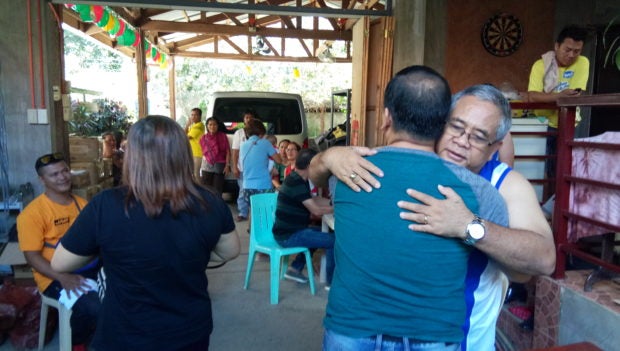 “It’s all over. The people of Davao del Sur have spoken. Let us accept defeat with a clean heart,” Peñas said as hundreds of die-hard supporters and followers went to his house in Barangay Zone 2 in Digos City to show their sympathy to the mayor who had been their political leader for several years. They even vowed to support Peñas in the next elections, for whatever position he would want to run.

But Peñas told them he already talked to his family and had decided to leave politics for good.

“I already forged an agreement with my family that I will quit from politics and return to my private life. I have given my best but it is not good enough for the people of Davao del Sur,” Peñas said.

Peñas, a certified public accountant and a lawyer, planned to go back to his legal practice and to teach in law schools.

“The legacy that you will be leaving behind will always be remembered. A person who I look up to since Day 1. My idol. It is now time to retire and live a private and peaceful life,” his son, Josef Leo Peñas, posted on his Facebook page.

The mayor’s son also thanked people of Digos City and Davao del Sur who supported his father through thick and thin. “(I can’t wait to have a private life with you, Pa,” Peñas’ son posted on his account.

About 8:12 am, after 84.6 percent of the votes had been canvassed, the Comelec central server posted Peñas to have garnered 97,708 votes against his opponent, reelectionist Governor Douglas Cagas, who garnered 156,707, or a lead of 60,000 votes.

Locsin to hotels backing out as quarantine sites: Duterte has power to seize