US targets $300B of Chinese goods for new tariff hikes

BEIJING – U.S. officials are targeting a $300 billion list of additional Chinese imports including laptop computers for tariff hikes, ratcheting up a trade fight that is shaking financial markets and fueling fears about global economic growth.

The release followed Beijing’s announcement Monday of tariffs of up to 25% on $60 billion of American imports in their spiraling dispute over Chinese technology ambitions and other irritants. 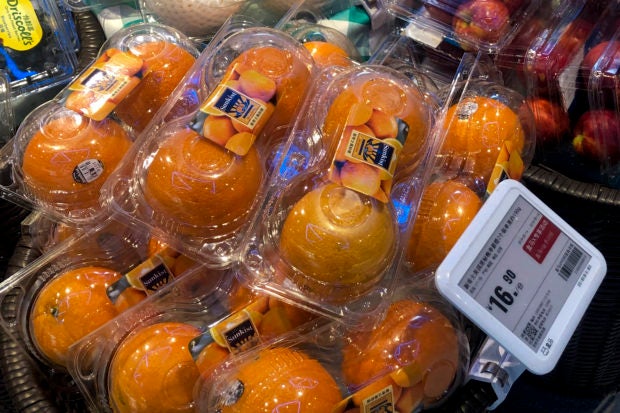 Oranges from the United States are on sale at a supermarket in Beijing, Tuesday, May 14, 2019. Sending Wall Street into a slide, China announced higher tariffs Monday on $60 billion worth of American goods in retaliation for President Donald Trump’s latest penalties on Chinese products. (AP Photo/Andy Wong)

The list of 3,805 product categories is a step toward carrying out President Donald Trump’s May 5 threat to extend punitive 25% duties to all Chinese imports, the U.S. Trade Representative announced.

It said a June 17 hearing would be held before Washington decides how to proceed.

The list “covers essentially all products” not already affected by punitive tariffs, the USTR said.

Asian stock markets fell Tuesday for a second day amid investor anxiety about the impact of trade tensions on global economic growth.

On Monday, the Dow Jones Industrial Average fell 2.4% and the tech-heavy Nasdaq lost 3.4% in its biggest drop of the year.

That came after Beijing retaliated for U.S. tariff increases Friday on $200 billion of U.S. goods.

China’s Finance Ministry announced duties of 5% to 25% due to take effect June 1 on about 5,200 American products, including batteries, spinach and coffee.

Trump warned Xi on Twitter that China “will be hurt very badly” if it doesn’t agree to a trade deal. Trump wrote that Beijing “had a great deal, almost completed, & you backed out!”

Both governments indicated more negotiations are likely. Trump said Monday he Xi would meet during the Group of 20 meeting of major economies on June 28 and 29 in Osaka, Japan.

The six weeks before that meeting will be “highly volatile” for financial markets, said Macquarie Bank analysts in a report.

“Both sides have the incentive to act half-crazy and unpredictable before that in order to cut a better deal,” they said. /gg

Read Next
Villar on presidency: No, ‘unless God gives it to me on a silver platter’
EDITORS' PICK
Smart 5G goes live
Water remains our saving grace right now
PNP: Checkpoints back in MECQ areas
Been there, done that but what’s the difference between MECQ and GCQ?
BREAKING: 3,226 latest COVID-19 cases bring PH’s total to 106,330
A gem of a residence in the new normal
MOST READ
MECQ guidelines in infographics
Doctors group to Duterte: ‘There was never a call for a revolt’
MECQ in NCR, other areas: Mass transportation suspended, quarantine pass required anew
Duterte heeds frontliners’ plea, reimposes MECQ in Metro Manila, other areas Aug. 4 -18
Don't miss out on the latest news and information.