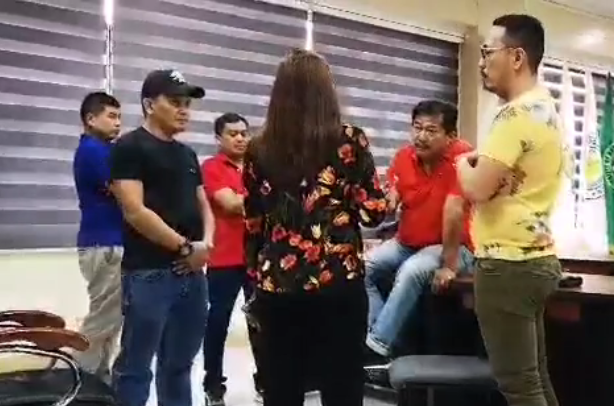 TAGUM CITY — A short confrontation erupted Tuesday between former House Speaker Pantaleon Alvarez and the Commission on Elections provincial election supervisor here arising from the delay of the proclamation of winning candidates in the province because of three defective SD cards.

Alvarez arrived at the Sangguniang Panlalawigan Legislative Building past 11 a.m. to check on the canvassing process but was surprised to find the hall deserted.

He demanded from the election staff to see Aimee Ampoloquio, chair of the Provincial Board of Canvassers, who declared a recess at 10 a.m. while the PBOC was waiting for the three reconfigured SD cards from Comelec Davao.

Comelec had earlier noted that the proclamation of winners would be delayed because of the three defective cards.

But this irked Alvarez who demanded from Ampoloquio some explanations.

“We have three defective SD cards,” said Ampoloquio before she was interrupted by Alvarez.

“Will it affect the results of the election?” Alvarez asked. “No,” Ampoloquio replied. “In other areas, for your information Ma’am,” Alvarez said, trying to explain to Ampoloquio that, in other areas, the PBOC had already proclaimed the winning bets.

Ampoloquio asked Alvarez to discuss the issue at the conference room. The discussion took 20 minutes and Alvarez walked out of the hall.

PDP-Laban legal counsel lawyer Marvin Pulido said Alvarez was already informed of the situation and that PBOC would resume the canvassing at 1 p.m. as scheduled. (Editor: Leti Boniol)