MANILA, Philippines — The early morning crowd at Baguio Central School were startled on Monday when more than 20 handcuffed men and women in yellow uniform lined up to cast ballots.

They were among 56 inmates who were escorted out of their cells at 6 a.m. and driven to 20 schools to vote.

been convicted and are eligible to vote, said Chief Insp. April Rose Ayangwa, the warden of Baguio’s female inmate ward.

But six other female inmates declined to vote, saying they did not want to be seen in cuffs. One  said she voted only for female candidates.

Another inmate, who is facing drug charges, said she voted for a senator who had a “friendlier approach to the antidrug campaign” compared to the administration’s more brutal war on drugs. —Ev Espiritu

The happy voters of Bel-Air

MANILA, Philippines — Monday’s midterm elections were not only peaceful and orderly at Barangay Bel-Air, one of the richest communities in Makati City, but also came with a little pampering for the electorate.

Voters were welcomed to an indoor, air-conditioned basketball court that doubled as a polling center, where they could find the location of their precincts not through the usual sheaves of paper thumbtacked to a bulletin board, but on laptop computers.

Free water was also made available to voters, while a soda company handed out drinks to first-time voters.

“People look forward to voting here, because it’s so convenient. We make sure that all the tables and chairs are properly placed and everybody is happy,” said Barangay Bel-Air Chair Constancia “Nene” Lichauco.

Still, election day even in such comfortable setting was not without problems. According to the local chapter of the Parish Pastoral Council for Responsible Voting, some voters were disenfranchised and were not able to cast their ballot after they failed to find their names on the list. —Patricia Denise S. Chiu

MANILA, Philippines — Some senators called on the Commission on Elections (Comelec) to deal once and for with all the perennial problems delaying the voting process after they themselves witnessed unnecessary inconveniences at their polling precincts.

Reelectionist Sen. Juan Edgardo Angara, who waited for nearly three hours before he and his wife, Tootsy, were able to vote, noted that there were not enough express lanes for senior citizens and people with disabilities in their polling center in Baler town, Aurora province. 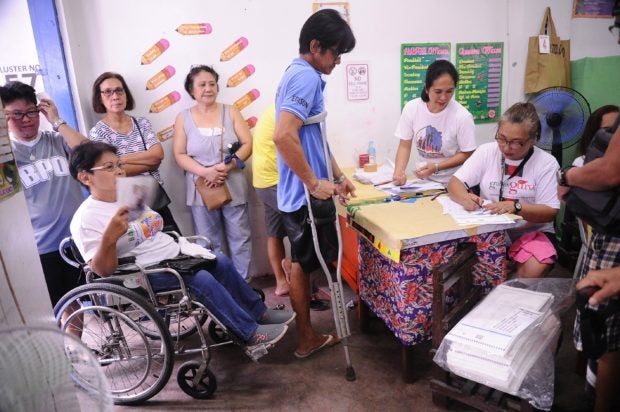 EAGER AND ABLE People with disabilities were among the early voters who turned up on Monday at Marick Elementary School in Cainta, Rizal province. They cast their ballots with the help of schoolteacher Cez Dolar acting as election official. —AUGUST DELA CRUZ

“We can work on that. Also, more chairs in [polling] precincts might help. [The voting] machine in our precinct conked out, which left just one working,” he said.

Sen. Joel Villanueva, who voted in his hometown in Bocaue, Bulacan province, said it took him “way longer” to cast his vote on Monday than in the previous automated elections.

“This time, five precincts are mixed in just one classroom even if there are still two classroom buildings available,” Villanueva said.

“But other than the long queues, the whole voting process was relatively OK. We hope the Comelec would make the next election season more bearable for our voters,” he added.

Senate President Vicente Sotto III said that while he was satisfied with how the elections were held in his polling area in Quezon City, he said his wife, Helen, was not able to use the voter registration verification system, which uses biometrics to confirm the identity of a registered voter.

Sen. Panfilo Lacson said the voting process in his area was “very organized and orderly” and it only took him only about three minutes to vote in Bayang Luma Elementary School in Imus City, Cavite province. —Marlon Ramos

The court gave her two hours, but it only took 10 minutes for detained Sen. Leila de Lima to cast her vote on Monday.

Granted a furlough to leave Camp Crame so she could vote, the opposition lawmaker, a resident of South Bay Village, Parañaque City, arrived at her polling center at St. Rita College in Parañaque City at noon on a coaster packed with security escorts from the Philippine National Police Custodial Center.

The escorts performed their usual protocol of surrounding De Lima and raising their hands to shield her from media cameras, even holding an umbrella above her.

The senator looked cheerful as she cast her vote, raising her ballot for reporters to see, before she was led away by police escorts. —JAYMEE T. GAMIL

Jinggoy Estrada on JV: We don’t talk, but…

MANILA, Philippines — Did half-brothers Sen. JV Ejercito and former Sen. Jinggoy Estrada, who are not exactly known for having the warmest of relations, vote for one another during Monday’s election?

“We don’t talk, but I voted for him,” Estrada told reporters at Xavier School, San Juan City, after casting his ballot alongside daughter and mayoral candidate Janella Ejercito Estrada.

Ejercito, who voted hours earlier at the same school, declined to disclose who were on his list. “My vote is my right, I don’t have to divulge,” the incumbent senator said.

He later added that he was a “team player,” but it was unclear if he had been referring to Estrada or the Hugpong ng Pagbabago team to which they both belonged.

Estrada repeatedly urged voters during rallies to support his half-brother, but Ejercito, who ran ads that labeled himself as “The Good One,” was more circumspect.

Ejercito’s supporters were far from pleased when Estrada decided to join the Senate race, as they feared that it could undermine JV’s reelection bid.

To his dismay, Padayon, who heads the city government’s PWD affairs office, along with several seniors, were told that the EAPP did not have its own vote counting machine (VCM).

They were asked to sign an authorization letter so that volunteer workers designated by members of the board of election inspectors could hand-carry their ballots and feed them into the VCM at their original precinct, which was located on the upper floors of the building.

The entrance to the EAPP also did not have a ramp, requiring wheelchair-bound voters to be carried into the room. —Melvin Gascon