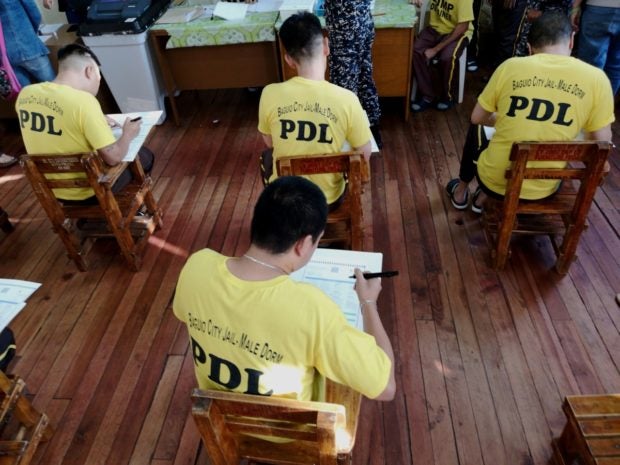 YELLOW ARMY. Yellow-garbed inmates of the Baguio City Jail were escorted out of their cells to their respective precincts to vote on Monday. INQUIRER / EV Espiritu

BAGUIO CITY — Around 56 Baguio inmates were escorted out of their cells as early as 6 a.m. on Monday (May 13) to 20 public schools so they could cast their ballots.

Because their respective cases have not yet been resolved, they were eligible to vote because they have not been convicted of any crime, said Chief Insp. Crispin Dornagon Jr., warden of the male dormitory at the Baguio City Jail.

Jail officers had to drive each batch to their designated precincts all over the mountain city.

Four of the inmates were female detainees, said Chief Insp. April Rose Ayangwa, the warden of Baguio’s female inmate ward. Six other women inmates declined to vote, saying they did not want to be seen in cuffs and yellow prison garb, she said.

The Bureau of Jail Management and Penology drew up a security plan for election day on Sunday (May 12) involving 63 jail officers, because the local prison was not provided with a voting machine.

The inmates who voted have pending robbery, theft, and drug possession cases. The youngest was 18 years old while the oldest was 62 years old.

The Baguio City Jail has 366 inmates, down from 500, after several of the prisoners took plea bargaining agreements to resolve their cases, said Dornagon.