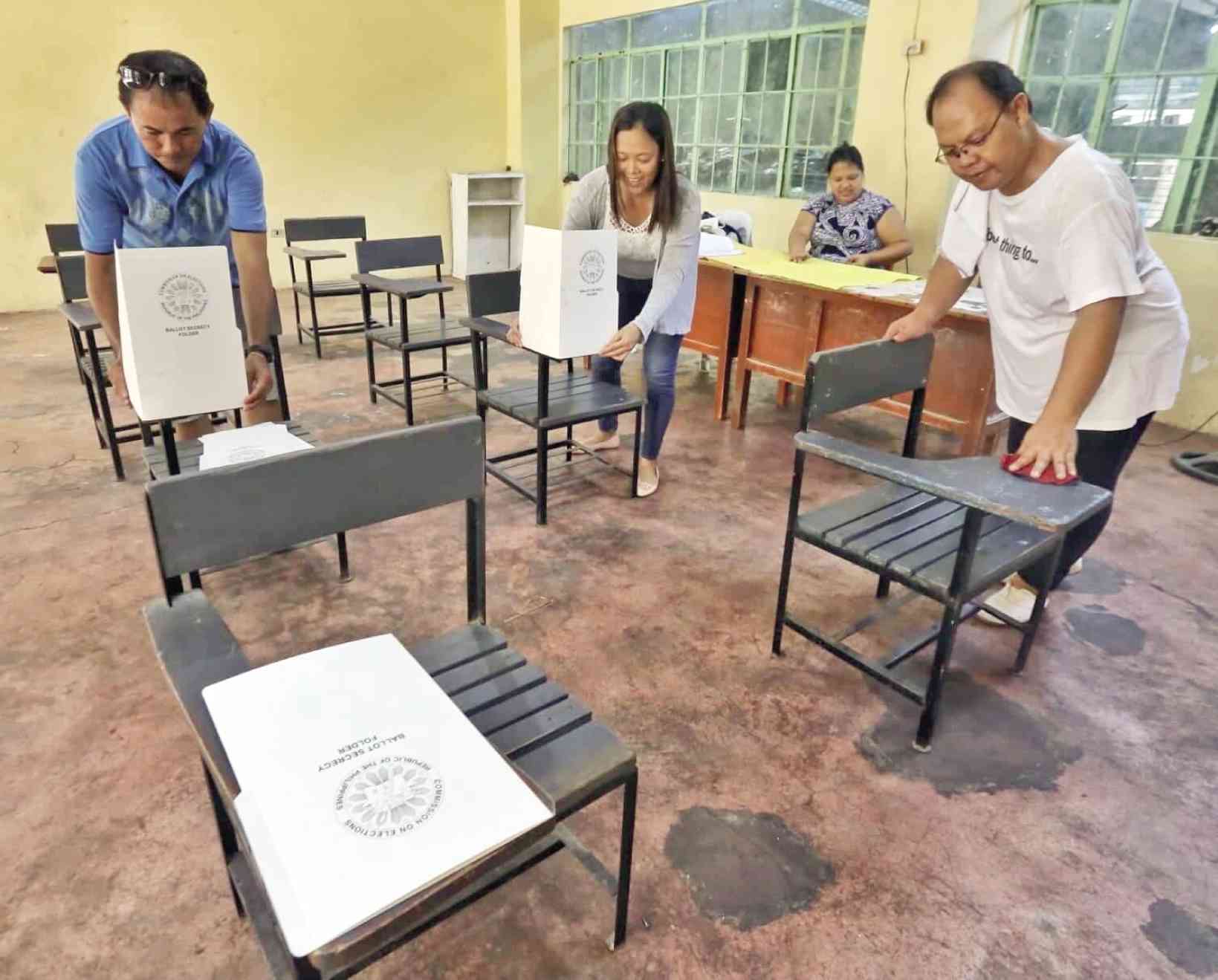 READY FOR VOTERS Teachers prepare the election paraphernalia they received from the Cebu City treasurer’s office and the classroom to be used as voting precinct for Monday’s midterm elections. —JUNJIE MENDOZA

MANILA, Philippines — President Rodrigo Duterte’s name is not on the ballot, but Monday’s midterm elections are seen as a crucial referendum on his rise to power with a brutal crackdown on illegal drugs, unorthodox style and contentious embrace of China.

Nearly 62 million Filipinos, the majority of whom are women, have registered to choose among 43,500 candidates vying for about 18,000 congressional and local posts.

More than 85,000 clustered polling precincts open at 6 a.m. on Monday, and will stay open until 6 p.m. to receive voters.

James Jimenez, spokesperson for the Commission on Elections (Comelec), said on Sunday that although the number of voters in these elections was higher compared to more than 50 million in 2016, voter turnout was expected to be only 75 to 78 percent.

He said the expectation of a lower turnout was due to people’s preference to vote in presidential elections.

Jimenez, however, said the actual turnout could be higher than expected.

“[V]oters are very engaged, especially [on] social media. Many voters have much to say, stubborn. We are hopeful that their noise and stubbornness will translate into actual participation to increase [the] voter turnout,” he said.

Aside from the 61.8 million voters registered at home, there are 1.8 million overseas voters, 1.1 million of whom, or 61.2 percent, are women.

The youth are the second largest voting bloc, 31 percent of the total vote, or 18.8 million.

Calabarzon is the region with the biggest voting population, 8.7 million, followed by the National Capital Region, with 7 million, and Central Luzon, with 6.8 million.

Jimenez said the proclamation of the winners of local races could be expected within 24 hours.

“In [the provinces], around 72 hours, and [at the national level, the winning senatorial candidates] are expected to be proclaimed within a week,” he said.

The Comelec plans to proclaim the 12 winning senatorial candidates simultaneously, as in 2016.

The full Comelec sits as the national board of canvassers beginning 3 p.m. on Monday at the PICC Forum in Pasay City.

Monday’s elections see the introduction of the voter registration verification system (VRVS), which is expected to add five minutes per voter to the voting process.

“We expect that the use of VRVS will not exceed five minutes. This is aside from the expected time for an ordinary voter of about 10 minutes,” Jimenez said.

The system is being piloted in all polling precincts in the Bangsamoro Autonomous Region in Muslim Mindanao, Manila and Quezon City.

The most crucial race in these elections is for 12 seats in the 24-member Senate, which the President swants to fill with allies to bolster his legislative agenda.

That includes the return of the death penalty, lowering the age of criminal liability of child offenders and revising the 1987 Constitution for a shift to a federal form of government, a proposal some critics fear may be a cover to remove term limits.

The political opposition considers the Senate the last bastion of checks and balances given the dominance of the President’s loyalists in the House of Representatives.

The President’s politics and key programs, including his war on drugs that has left more than 5,200 mostly urban poor suspects dead, have been scrutinized on the campaign trail and defended by close allies running for the Senate, led by his former national police chief, Ronald dela Rosa, who first enforced the crackdown when the President took office in 2016.

Aside from the drug killings, President’s colorful language and what nationalists say is a policy of appeasement toward China that may undermine Philippine territorial claims in the South China Sea have also been hounded by protests and criticism.

“This is very much a referendum on his three years of very disruptive yet very popular presidency,” Manila-based analyst Richard Heydarian said in an interview with The Associated Press (AP).

“Are we going to affirm or are we going to reject the 2016 elections? Was that an aberration and historical accident that we have to fix, or is this actually the beginning of the kind of new era or new normal?” Heydarian asked.

A May 3-6 survey by independent pollster Pulse Asia showed 11 of Duterte-backed senatorial candidates and four other aspirants in the winning circle, including only one from the opposition.

The survey of 1,800 respondents had a margin of error of plus or minus 2.3 percentage points.

While polls strongly indicated a favorable outcome for Mr. Duterte, there was a probability that the result could still change given the considerable number of undecided voters and narrow leads of some candidates.

The Philippine National Police gave assurance on Sunday that Monday’s vote would be peaceful.

“We have received no threat or reports of terrorism. But we cannot take chances. We maintain a full alert status,” said Police Col. Bernard Banac, spokesperson for the PNP.

More than 75,000 policemen, backed by 34,000 military troops, will secure polling precincts throughout the country, Banac said.

The PNP said that of 945 areas designated as election hot spots, four had been placed under Comelec control: Daraga town in Albay province; Cotabato City in Maguindanao; Moises Padilla in Negros Occidental; and Rosario in Agusan del Sur.

In those areas, the Comelec has taken immediate and direct control and supervision over national and local officials as well as law enforcement agencies performing duty related to the elections.

Earlier, the PNP reported 20 people killed and 24 injured in 43 preelection violence since Jan. 13.