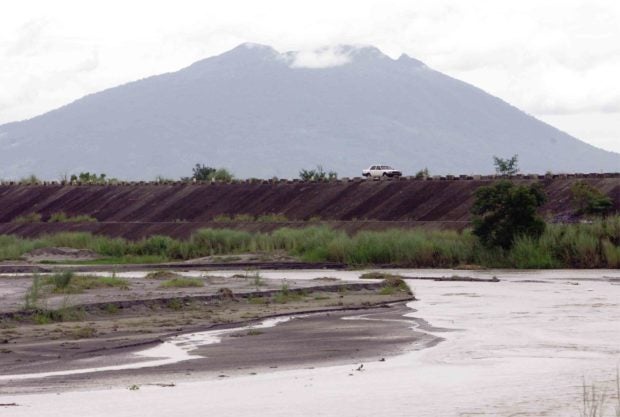 LAST DEFENSE The FVR Megadike, one of the most important structures built in Central Luzon after the Mt. Pinatubo eruption in 1991, is Pampanga’s last defense against lahar. —INQUIRER PHOTO

CITY OF SAN FERNANDO, Pampanga, Philippines — The FVR Megadike, touted by government to be Pampanga’s defense against lahar discharged by Mt. Pinatubo, had withstood the 6.1-magnitude earthquake that shook parts of Luzon on April 22, according to an initial assessment by the Department of Public Works and Highways (DPWH).

A severe crack and ground displacement were recorded at the east lateral dike at Barangay Maliwalu in Bacolor town, Manalo said. That side faces Pampanga’s capital city of San Fernando where private investments are estimated to run into billions of pesos.

Cracks as long as 30 meters were also detected along the west lateral dike facing Sta. Rita and Porac towns.

Built by the DPWH in 1995 to confine volcanic sediments that were washed down by rain to the Pasig-Potrero River, the U-shaped megadike was built from compacted lahar that was reinforced with concrete slopes.

In 1997, its transverse dike, which was designed to slow down lahar flow and protect the Gapan-San Fernando-Olongapo Road, was washed out, leading to the conviction of top DPWH officials for graft.

Between 1997 and 1998, strong typhoons formed what the DPWH called “gullies,” or pools of water that degraded sections of the dike.

The cost of repairs, improvement and maintenance of the megadike had reached P1.7 billion, all through Japanese loans obtained for the Pinatubo Hazard Urgent Mitigation Project.

In 2012, the DPWH began paving the megadike with asphalt, converting it into a road connecting to the Subic-Clark-Tarlac Expressway. —Tonette Orejas