Karina David: Songs, stories, service to remember her by 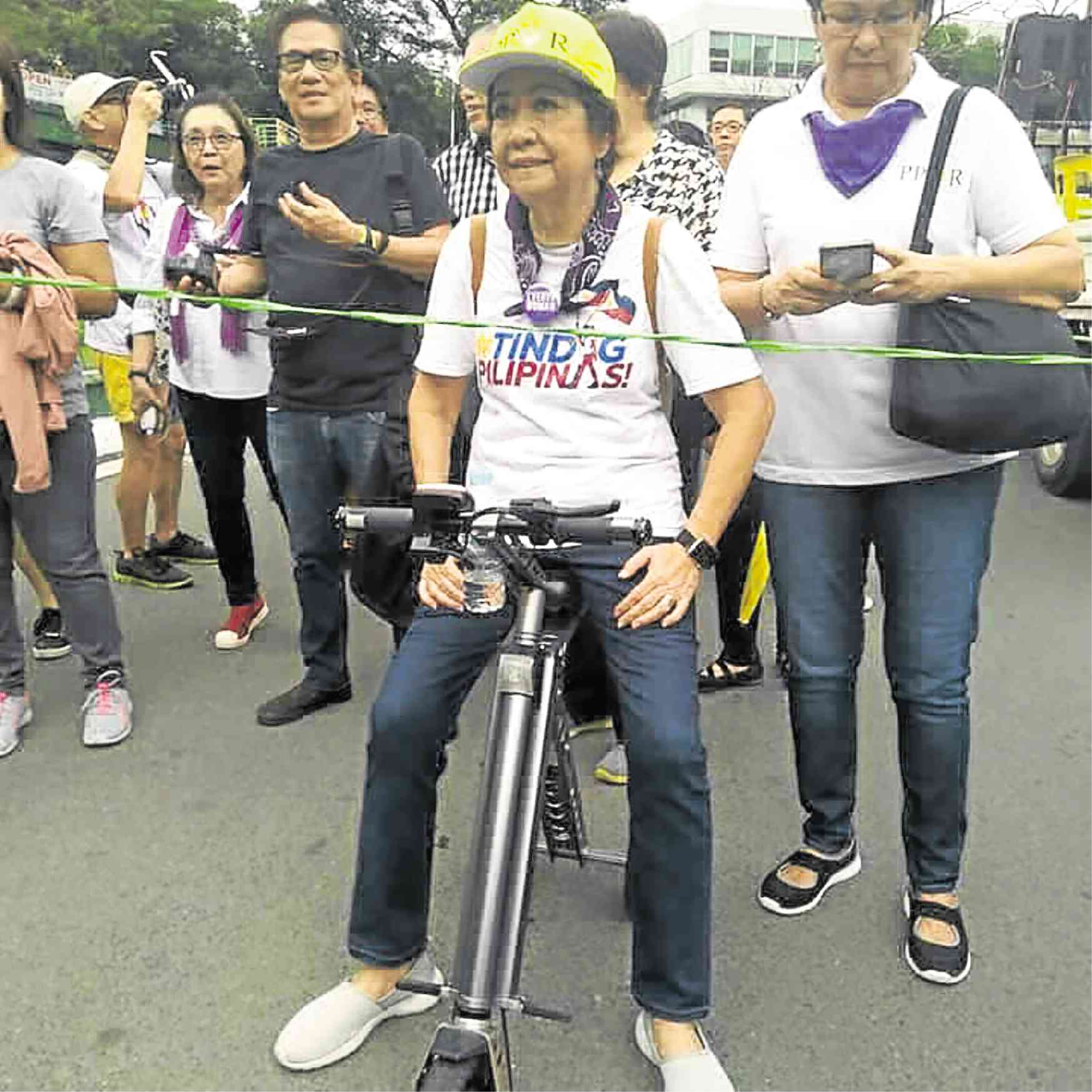 STANDING HER GROUND She may have needed a motorized wheelchair to get around, but Karina Constantino-David was always at the forefront of protest rallies against injustice, like this mobilization on the quo warranto petition against former Chief Justice Maria Lourdes Sereno in early 2018. —JAZ ROQUE PARADO/CONTRIBUTOR

MANILA, Philippines — Professor, community organizer and public servant Karina Constantino-David died on May 7, but her legacy of music and activism will endure, said the women whose lives she touched.

Constantino-David, who was Civil Service Commission chair during the Arroyo administration, was also half of the music duo Inang Laya for nearly 30 years as guitarist and composer, while Rebecca “Becky” Demetillo-Abraham was its singer.

Abraham, now 70, credited Constantino-David with opening her eyes to the possibility of using music to further an advocacy. She’s not about to say goodbye, she added.

“We will always be together through the songs, through our dreams. My basket is full, and I will carry that until we meet again,” Abraham said.

Inang Laya is known for advocacy songs such as “Babae,” “Titser,” “Sana’y Mayaman” and “Atsay ng Mundo,” which talks about the plight of domestic helpers.

She didn’t always sing these kinds of songs, Abraham recalled.

“I was doing Western folk in the late 70s, when Karina and her husband Randy and some faculty friends would come to watch us in a bar in Kamias,” she said.

One night, Constantino-David went up to the microphone and sang a rendition of Jess Santiago’s “Halina,” which was about union workers killed while protesting.

“It blew my mind,” Abraham said, adding that shortly after, in the middle of a set, she left her previous singing job in pursuit of something more progressive.

“Then I called Karina, and told her, ‘I’m ready,’” Abraham said.

At the same time that their career was blooming — Inang Laya released several albums — Constantino-David was diving deeper into community organizing.

She was friend and mentor to her, recalled former Department of Social Work and Development Secretary Corazon “Dinky” Soliman.

“I was a new graduate of the UP (University of the Philippines) College of Social Work and Community Development and she was head of the research team,” Soliman said, adding that she initially thought that Constantino-David was “a rigorous and strict person who demanded excellence.”

But behind that tough exterior, Constantino-David turned out to be a caring mentor who coached her young colleagues on what can and should be done.

“She became a strong influence in my life, first, in the fight against the Marcos dictatorship, and then in advocacy work,” Soliman said.

Along with Abraham, Constantino-David formed Harnessing Self-Reliant Initiatives and Knowledge, or HASIK, a nongovernmental organization involved in urban poor empowerment, gender development, protection of children and adolescents and housing and livelihood projects.

“I thought she was a perfect partner for me [because] we thought the same way, but I didn’t know how to push. Karina helped me with that,” Abraham said.

Teresita “Ging” Quintos-Deles, who was presidential adviser on the peace process during the Aquino administration, found Constantino-David to be “very intense.”

“I think one of her admirable traits was her analytical capacity and systematic thinking. She also understood how important networking is,” Deles said.

Despite her serious approach to work, Constantino-David was also a wonderful storyteller, she added.

“A funny story was always funnier when she told it, a suspenseful story more cliff-hanging, a ‘kilig’ story even more so—long car rides were never boring,” Deles said.

“I remember we were the first delegation to go to Canada post-1986, to talk about the changed situation in the country,” she said. Constantino-David, being then DSWD undersecretary, was head of the delegation.

After a long day of meetings, Soliman said Constantino-David whipped out her guitar and, in an audience that included the Canadian Minister of Aid, “started singing.”

“It was really fun. You could see the breadth and width of her personality,” Soliman said.

Even in her later years, Constantino-David never wavered in her advocacy work and helped convene Every Woman, a movement for gender equality and respect for women.

“She was a staunch feminist and was very active in Every Woman. She stressed the need for women organizations  in this present regime to call out misogynistic comments,” Soliman said, adding that Constantino-David said in one of her last messages that she “will be there in spirit” with her fellow advocates on May 8, during the thanksgiving event for supporters of the opposition Otso Diretso coalition at UP Diliman.

“And I really believe that. She was really with us in spirit,” Soliman said.

Constantino-David, 73, was born on March 19, 1946, and was the daughter of historian Renato Constantino.

She left behind husband and Inquirer columnist Randy, children CP and Ani, Kara and LM, Nadya and Patrick, and Jika and Brice, and grandchildren Julia, Jacinta, Xavier, Alonso and Lila.