Mexicans march for their missing children on Mother’s Day

Mexicans with missing children led marches on Friday — when Mother’s Day is celebrated here — to protest the government’s failure to find their sons and daughters or bring their cases to justice. 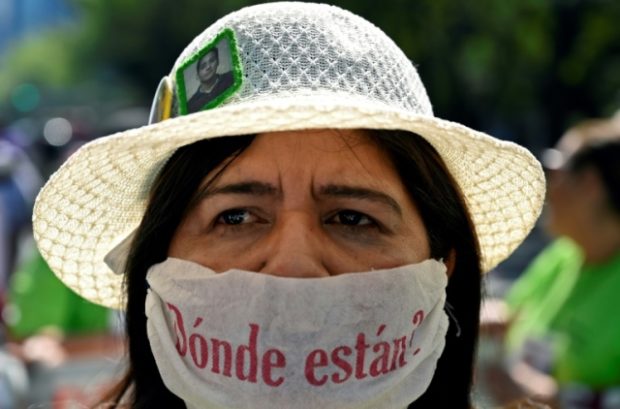 A woman with a surgical mask reading “Where are they?” takes part in a march of activists and relatives of missing people to demand answers on the whereabouts of their loved ones, as part of the commemoration of Mothers’ Day in Mexico City. Image: ALFREDO ESTRELLA – AFP

There are more than 40,000 missing persons in Mexico, which has been hit by a wave of violent crime in recent years linked to powerful drug cartels.

Protesters marched in 16 cities, including around 2,000 people in the capital, to voice their outrage and anguish over the thousands of clandestine graves that have been discovered in the country, and the tens of thousands of other missing persons who have never been found.

“I’ve been crying for the past eight years. I just want to know what happened to him,” said Maria Guadalupe Aguilar, 64, a demonstrator at the Mexico City march whose eldest son, Jose Luis, disappeared in 2011 on his way to a business meeting in the city of Guadalajara.

“We’re raising our voices so that what happened to our children doesn’t keep happening,” said a sobbing Lourdes de la Cruz, 61, whose youngest son, Daniel, disappeared in the city of Coatzacoalcos along with 30 other people in 2015, when he was 21.

The mothers carried large photographs of their missing children, shouting to passersby, “It could be your children, too.”

President Andres Manuel Lopez Obrador gave a Mother’s Day message at a press conference, in which he said he was thinking especially of “the mothers who are looking for their missing children.”

Critics accuse the leftist leader, who took office in December, of failing to keep his promise to curb the violence plaguing the country.

This year is on track to be the most violent ever, with a record 8,943 murders in the first three months of the year.

The bodies were left splayed on the ground in front of the town’s monument to mothers.

The town is located in Morelos state, which has been the scene of turf wars between rival criminal groups. NVG