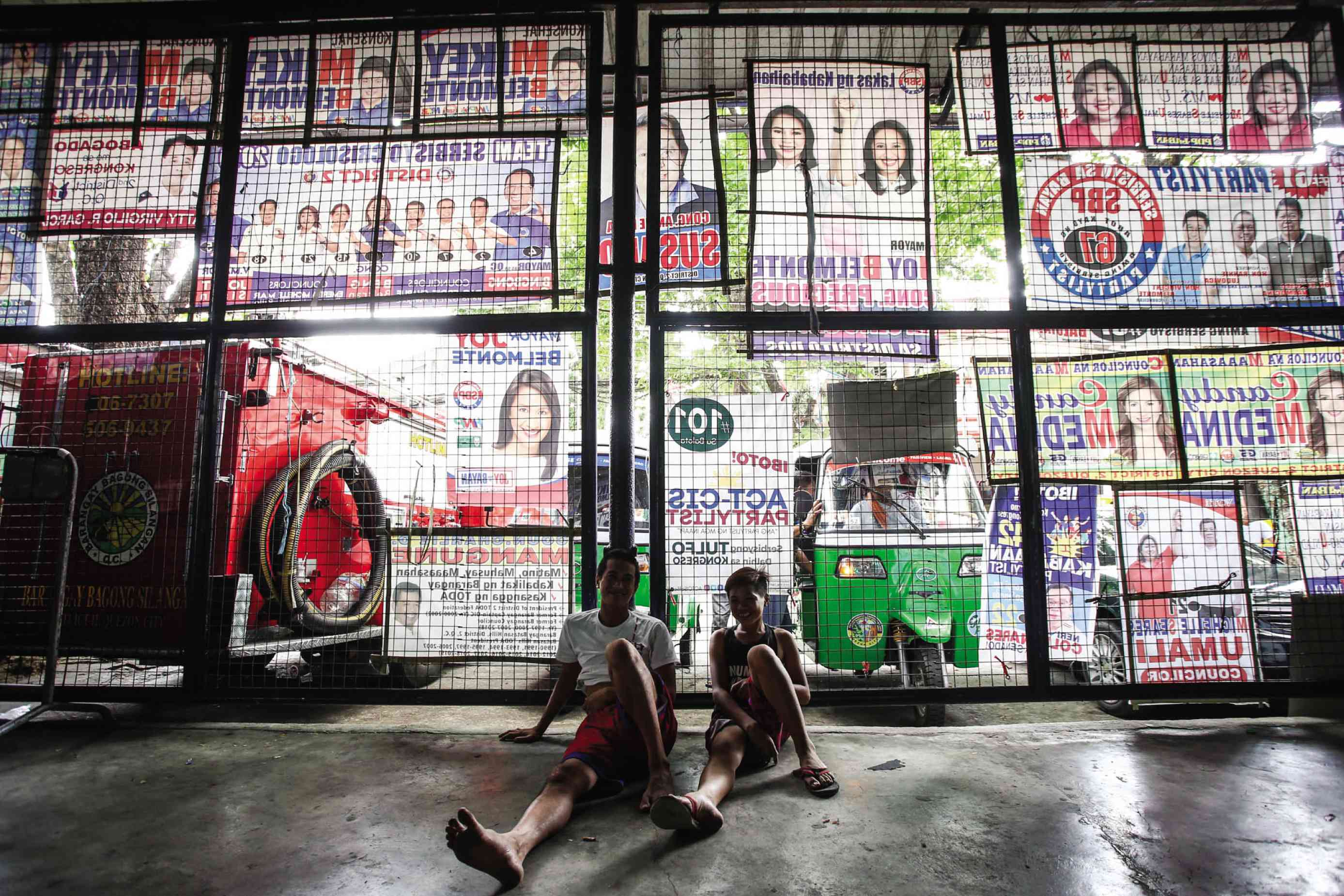 WAITING FOR CHANGE With power rarely changing hands in the country’s political system, the coming May 13 elections may or may not spell a difference in the lives of these residents of Barangay Bagong Silangan, Quezon City, where an indoor basketball court also serves as a campaign poster area. —JAM STA. ROSA

The boxing-champ-turned-senator has apparently quickly learned that one key way of thriving in traditional Philippine politics is to create alliances.

For the midterm elections, Sen. Manny Pacquiao is backing the congressional run of no less than three party list groups: OFW Family Club headed by his brother Alberto Pacquiao; Wow Pilipinas Movement, one of the main sponsors of his recent bout in Las Vegas; and People’s Champ Guardians, a spinoff of the political party that he and his wife, Jinkee, founded in 2009.

There’s nothing subtle in the exchange, or at least not for the breed of politicians to which Pacquiao now belongs.

In the current landscape, politicians endorse the candidacy of party list groups supposedly aligned to their cause or advocacy, or they themselves throw their hats into the ring to be part of the system originally intended for the marginalized and underrepresented sectors of Philippine society.

For example, the third most powerful man in the government, Senate President Vicente “Tito” Sotto III, has endorsed the party list group Luntiang Pilipinas, naturally because it is fielding his daughter, actress Ciara Sotto, as its second nominee. (The group’s first nominee is former Inquirer Day Desk chief Mike Ubac.)

For another example, reelectionist Sen. Sonny Angara has announced his alliance with Inang Mahal led by former Pangasinan Rep. Gina de Venecia, who is seeking a comeback in the House of Representatives after foregoing a run for her province’s fourth congressional district in 2016.

De Venecia’s plan to regain a seat in the House via the party list route is not unique to her.

According to data from election watchdog Kontra Daya, at least 25 party list groups are fielding nominees who are former lawmakers or local officials who have reached their constitutional limit of three consecutive terms.

A number are among the 38 party list groups identified by a youth coalition as fielding nominees who are members of political dynasties, like Metro and 1AAAP.

It’s worth noting as well that certain business interests have likewise infiltrated the party list system. Two of these groups are: Construction Workers Solidarity led by former Public Works Undersecretary Romeo Momo Sr., who was implicated in the P427-million road scam in 2014, and 1Pacman led by construction magnate and incumbent Rep. Michael Romero, who, with a net worth of P7 billion, holds the distinction of being the wealthiest lawmaker.

There is nothing in the law to stop politicians and even big business interests from taking part in the party list system. No less than the Supreme Court said in a landmark 2013 ruling that party list groups need not represent a marginalized and underrepresented sector.

But according to Etta Rosales, one of the pioneer lawmakers in the party list system, the high court’s ruling abandoned the spirit of the law that was meant to provide the marginalized a voice in Congress and gave politicians and their families and allies the means to perpetuate themselves in power.

“[It] legitimized what political dynasts were already doing,” said Rosales, who served as Akbayan’s representative from 1998 to 2007. “With that legitimization, it opened the floodgates to political families. So now you have several hundreds of families vying for positions through the party list system.”

“There is nothing wrong with party list groups to be able to gain power,” Rosales said. “Power is not the problem. How power is utilized for the masses is what counts.”

In this election cycle, party list groups no longer have pretensions of being fronts of politicians and power brokers, Kontra Daya convener Danilo Arao observed.

“It’s a confirmation of how certain party list groups are being used not only by the rich and powerful but also by proadministration groups and individuals. They need the numbers in Congress, to the point that they will hijack even the 59 seats allotted for the marginalized and underrepresented,” Arao said.

Among the groups vowing to push policies supportive of the administration’s programs and agenda, that have been endorsed by President Duterte himself, or that are fielding relatives in government positions as nominees are: Tao Muna, Marino, Partido Sandugo, ACT-CIS, 1-APTO, Duterte Youth and AA-Kasosyo.

“We expect party list groups to be biased for the marginalized and underrepresented,” Arao said. “If it means [being] critical of the administration, then so be it. If there are a lot of party list groups that would align themselves with the President, it’s like saying that [he] is faultless when it comes to taking care of the marginalized and underrepresented.”

That is why voters should think hard when they cast that lone vote for a party list group on Monday, Arao said. What is on the line is Congress’ independence, or whatever is left of it, he said, adding:

“[We may] end up with a mouthpiece or a rubber stamp for a Congress. Do we want that?”