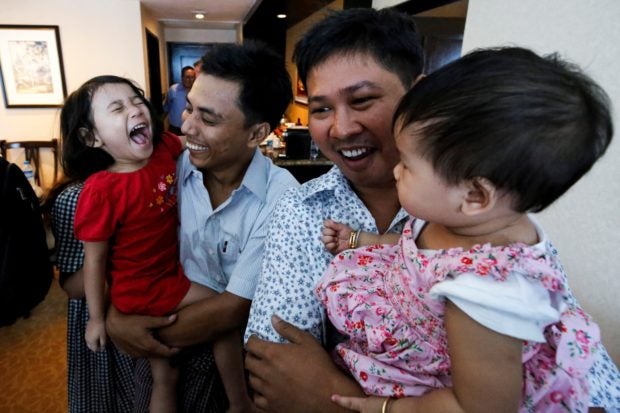 Reuters journalists Wa Lone (R) and Kyaw Soe Oo celebrate with their children after being freed freed from Insein prison after a presidential amnesty in Yangon on May 7, 2019. AFP

The Asia News Network, an alliance of 24 leading media in 20 Asian countries, welcomes the release of Reuters Journalists Wa Lone and Kyaw Soe Oo by the Myanmar government on Tuesday.

We applaud the government’s decision to release both men and urge upon the government the need to protect and ensure press freedom.

Both Wa Lone and Kyaw Soe Oo have been imprisoned for over 500 days for simply doing their job and reporting the truth. While we commend the government on their release, we maintain that neither should have spent a day behind bars.

While we do not question Myanmar’s right to press for redress if it feels wronged by a news report, we question the use of a colonial era law, introduced by an oppressive British Colonial Government, to maintain order.

We humbly remind the government that as Myanmar democratizes and strives to throw off the weight of past oppression that such laws are a heavy anchor imposed upon her by past injustices.

A credible press is a crucial and a necessary component of a civil society. A vibrant media sector and inquisitive journalists are assets for the population and should not be muzzled, intimidated or censored. Myanmar journalists sadly remain under severe threat despite the Reuters journalists’ release.