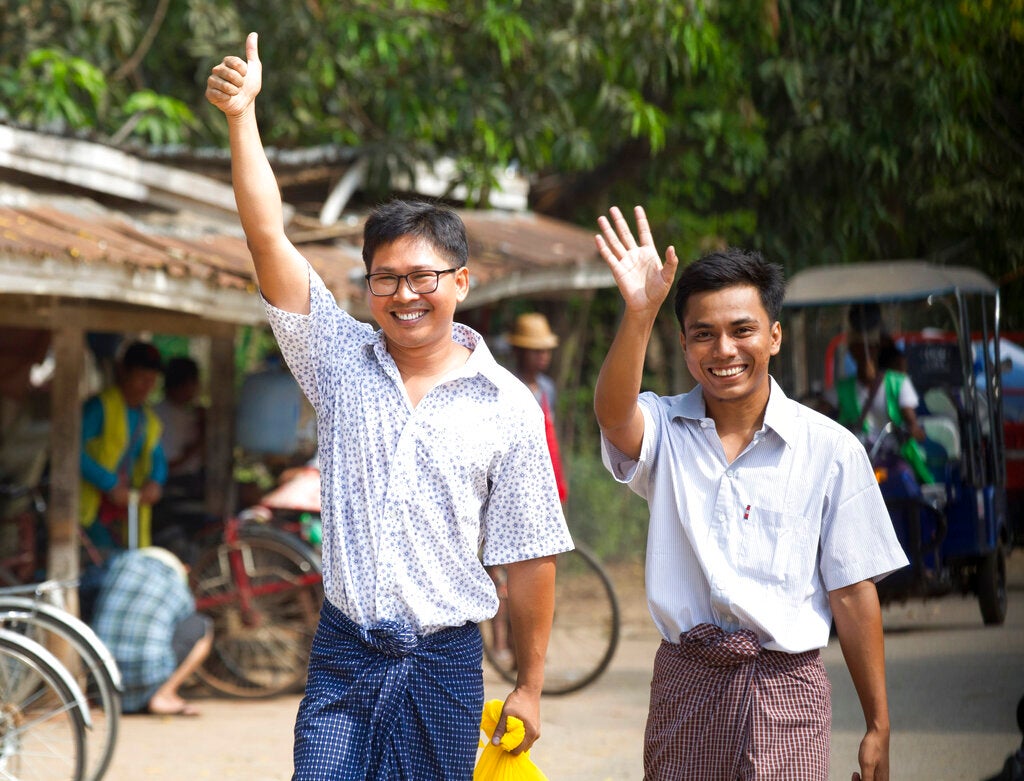 Reuters journalists Wa Lone, left, and Kyaw She Oo wave as they walk out from Insein Prison after being released in Yangon, Myanmar Tuesday, May 7, 2019. The chief of the prison said two Reuters journalists who were imprisoned for breaking the country’s Officials Secrets Act have been released. (AP Photo/Thein Zaw)

YANGON, Myanmar — Two Reuters journalists whose imprisonment for their reporting on the Myanmar military’s abuses of Rohingya Muslims drew the world’s attention to curbs on freedom of the press were freed in a mass presidential pardon.

Wa Lone, 32, and Kyaw Soe Oo, 28, walked out of Yangon’s notorious Insein Prison at about 9:40 a.m. Tuesday. As they passed through the front gate, waving to the gathered crowd, they were mobbed like rock stars by fellow reporters who as professionals had covered their plight and as colleagues had pushed for their release.

“I want to say that I am very happy today. I want to thank our friends and families who were trying for our freedom and also to those from all over the world who sympathized with us,” Wa Lone said. “I am really excited to see my family and colleagues. I can’t wait to go to my newsroom.”

Then they were hustled into a black van and taken to reunite with their families.

The two reporters were arrested in December 2017 as they were working on a story about security forces involved in killing Rohingya and were accused of illegally possessing official documents, a violation of the colonial-era Official Secrets Act. At their trial the two contended they were framed because of official displeasure over their work, but they were convicted last September and sentenced to seven years in prison.

The case drew global attention not only as a media freedom issue but also as an example of how democratic reforms in Myanmar have stalled under Nobel Peace laureate Aung San Suu Kyi’s civilian government, which took power in 2016 with high hopes that it would usher in a new, more open era after decades of isolation under military rule.

It also came as international condemnation built over the brutal counterinsurgency campaign that Myanmar’s military — which still maintains unchecked control of key ministries such as those responsible for security — launched in the western state of Rakhine, driving more than 700,000 members of the Rohingya minority group to flee to Bangladesh. U.N. officials and others likened the offensive to ethnic cleansing, or even genocide.

Stories based on reporting from Wa Lone and Kyaw Soe Oo were published while they were in prison and the two last month were part of a Reuters team that won the Pulitzer Prize for International Reporting, one of journalism’s highest honors. They shared the award with The Associated Press, which won for its reporting on Yemen.

Zaw Htay, a spokesman for the office of President Win Myint, told journalists he spoke with in the eastern state of Kayah on Tuesday that the reporters’ families had sent letters requesting they be pardoned, and they were included among 6,520 prisoners released to promote peace and national reconciliation.

The families of Wa Lone and Kyaw Soe Oo, their employer, press freedom groups, and journalist associations around the world had called for their release all along. Prospects looked grim after Myanmar’s Supreme Court on April 23 rejected their final appeal of their prison terms, and even grimmer after they were not included in two other recent mass pardons.

It wasn’t clear what had changed by Tuesday, but the news was welcomed by rights groups and many others.

“I think this will reduce the pressures on Myanmar’s government by the international community,” said Yan Myo Thein, a political analyst. “Releasing them is progress. But it will be better for democracy and the transition of Myanmar if the president will consider releasing (all) those who are in jail for exercising freedom of expression.”

The U.N. human rights office in Geneva welcomed their release but said they never should have been arrested. “We remain concerned about flaws in the judicial process that led to their conviction in the first place,” spokeswoman Ravina Shamdasani said.

White House press secretary Sarah Sanders also welcomed their release. “We hope that other jailed journalists in Burma will also be allowed their freedom,” a statement from her office said, using Myanmar’s previous name.

At the time of their arrest, Wa Lone and Kyaw Soe Oo were working on an investigation of the killings of 10 Rohingya villagers. The government last year said seven soldiers were sentenced to up 10 years in prison with hard labor for the killings.

Reporting on the Rohingya is sensitive in Myanmar, where many of the country’s majority ethnic Burmans agree with the official government of denying the group citizenship and labeling them as illegal migrants from Bangladesh. The military has said its actions in Rakhine state were a response to attacks by Rohingya guerrillas, and it did not have a policy violating human rights or the laws of war.

During their trial, the prosecution claimed the Reuters reporters were found in possession of secret government documents. The defense said the documents were neither secret nor sensitive and had been given to them by police seeking to frame them.

That assertion was supported by surprise testimony from a whistleblower in the police department, who told the court that his superior had arranged for two policemen to meet the reporters and hand over documents described as “important secret papers” in order to entrap them.

As a result of his testimony, that officer was jailed for a year for violating the Police Disciplinary Act and his family was forced to leave their police housing unit.

Even with the reporters’ release, serious concerns remain about freedom of expression in Myanmar.

The Myanmar group ATHAN, the Freedom of Expression Activist Organization, said last month that 47 journalists have faced trials since Suu Kyi came to power, and 31 have complaints against them pending. Of the 31, 18 were sued by government officials, four by the military and nine by various individuals.

The online magazine The Irrawaddy and other media outlets have recently been sued by the army for their coverage of fighting between the government and the Arakan Army ethnic rebel group, which also operates in Rakhine state.