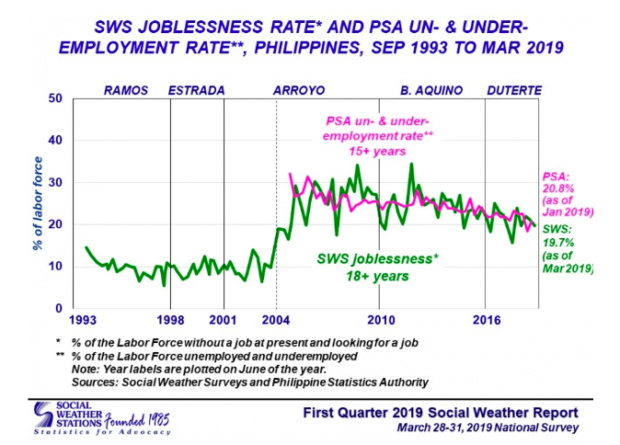 MANILA, Philippines — The joblessness rate in the Philippines in the first quarter of 2019 declined for the second straight quarter, the latest Social Weather Stations (SWS) survey released Tuesday showed.

According to SWS, the adult joblessness rate in the country during the first three months of the year stood at 19.7 percent or an estimated 9.4 million adults.

“This marks the second consecutive quarter where there has been a decrease in the proportion of adults in the labor force who are jobless,” SWS said.

The survey noted that joblessness went down in Metro Manila and Mindanao but increased in Balance Luzon and the Visayas.

SWS added that joblessness remains higher among women than among men, and it is highest among the 18 to 24 age group, and higher in urban areas than in rural areas.

Despite the decrease in the joblessness rate, the number of jobless Filipinos increased from 9 million in December 2018 to 9.4 million in March 2019.

The pollster said that of the 9.4 million jobless adults, around 4.5 million voluntarily left their jobs, 3.6 million were retrenched or those “who lost their jobs due to economic circumstances beyond their control,” and around 1.3 million are first-time job seekers.

The survey noted that the net optimism of Filipinos on job availability in the country is “very high”.

SWS said that 50 percent of respondents said they are optimistic that more jobs will be available in the next 12 months while 13 percent said otherwise, leading to a net optimism score of +37, which the survey considers to be ‘very high.’

This is lower than the ‘excellent’ net optimism rating in December 2018 when the score soared to +40.