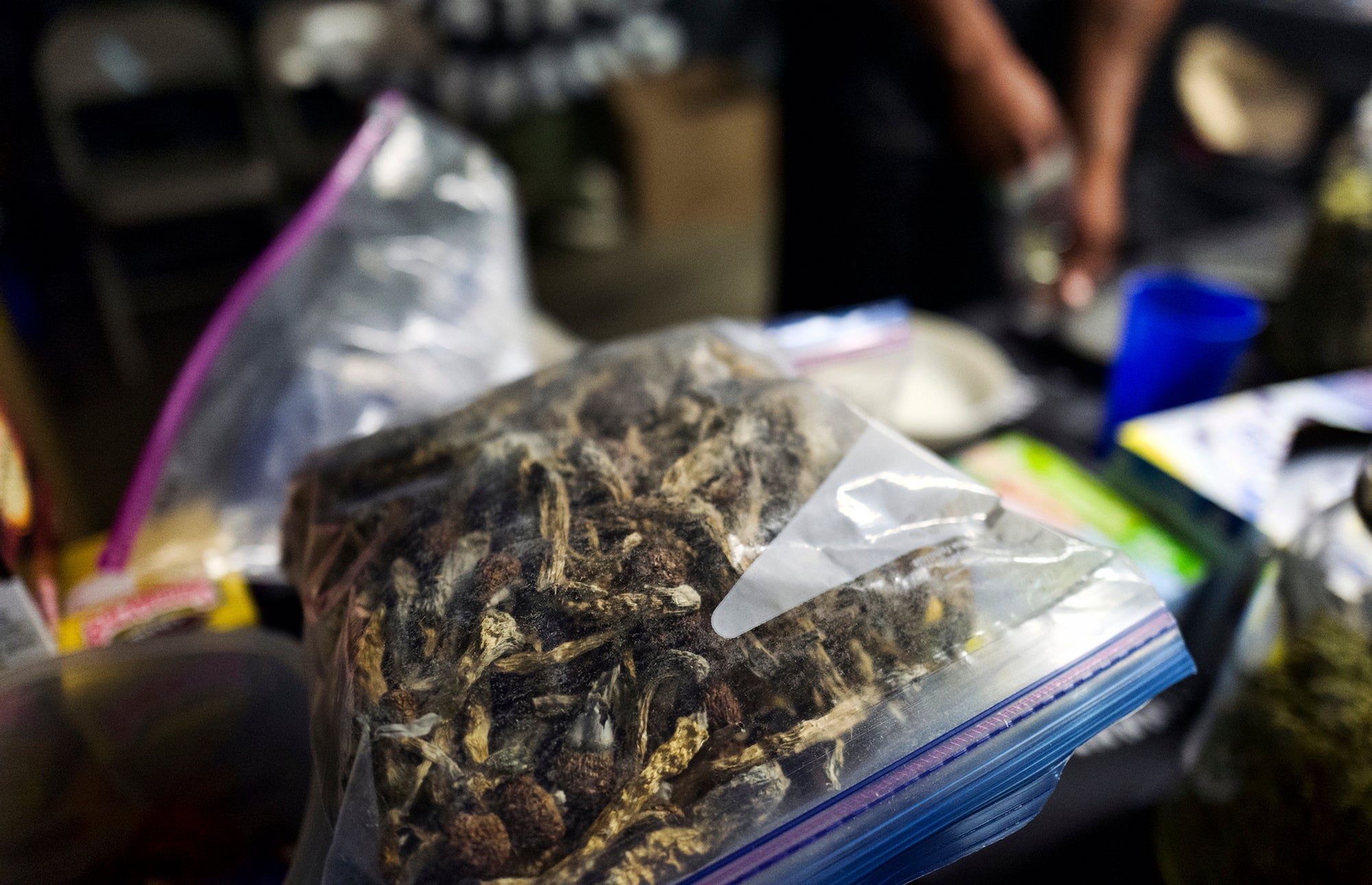 A vendor bags psilocybin mushrooms at a pop-up cannabis market in Los Angeles on Monday, May 6, 2019. Voters decide this week whether Denver will become the first U.S. city to decriminalize the use of psilocybin, the psychedelic substance in “magic mushrooms.” (AP Photo/Richard Vogel)

DENVER — Voters on Tuesday could make Denver the first U.S. city to decriminalize psilocybin – the psychoactive substance in “magic mushrooms” – and add a new chapter to the city’s role in shaping wider drug policy.

A citizen initiative on the ballot has followed the same tack taken by marijuana activists to decriminalize pot possession in 2005 in the city. The move was followed by statewide legalization in 2012. A number of other states followed and broadly allow marijuana use and sales by adults.

Psilocybin campaign organizers said their only goal is to keep people out of jail for using or possessing the drug to cope with depression, anxiety, post-traumatic stress, and other conditions.

Kevin Matthews, director of the Decriminalize Denver campaign, said psilocybin has helped him deal with depression for years.

“This is not something you have to take every day,” the 33-year-old Denver native said. “It provides a lot of lasting benefits, weeks and months after one experience.”

Psilocybin has been outlawed in the U.S. since the 1960s, and some researchers warn that it should only be used under medical supervision and can prompt paranoia and anxiety.

The federal government classifies psilocybin as a Schedule I drug, with no medical purpose and a high potential for abuse.

For decades, that status has stymied research into medical uses of psilocybin, but small, closely supervised studies in recent years have found that it can help treat anxiety and depression in cancer patients. Participants have described seeing vivid colors and geometric patterns, and experiencing powerful spiritual connections and emotions.

Magic mushrooms have been used in religious practices for decades due to their powerful effect on perceptions and spiritual experiences. Those same effects have appealed to recreational users dating back to the counterculture of the 1960s.

A California effort to decriminalize psilocybin failed to qualify for the statewide ballot in 2018. Organizers in Oregon are trying to gather enough support to put an initiative to a statewide vote next year.

It took the pro-psilocybin organizers in Denver three tries to develop language approved by city officials for the ballot. They collected more than 8,000 signatures to qualify for Tuesday’s election.

Denver Mayor Michael Hancock opposed the initiative along with District Attorney Beth McCann, but there has been no organized campaign against it.

The election has largely been focused on a six-way race for mayor and a heated effort to end Denver’s “urban camping” ban that affects people without housing and has pitted activists against well-financed business and development groups.

Supporters of the psilocybin initiative have done door-to-door canvassing, documentary screenings, and leafleting at community events or outside Coors Field before Colorado Rockies’ games.

The initiative would effectively decriminalize use or possession of psilocybin by people 21 and older, making it the lowest enforcement priority for police and prosecutors.

The proposed ordinance also would prevent city funds from being used to pursue criminal penalties on possession or use, and create a panel to study the effects of the change.

The measure does not legalize psilocybin or permit its sale by cannabis businesses.

“Nobody should be penalized for this substance,” Matthews said. “One arrest is too many. No person deserves this kind of treatment for a substance this safe.” /kga

Read Next
Brother of New Corella town mayor gunned down
EDITORS' PICK
Ahead of ONE: Full Blast II, Mongkolpetch warns Elias Mahmoudi: ‘Watch out for my fists’
COVID situation still ‘very fragile’ due to surge in regions – DOH
1Sambayan names 6 choices to pit vs Duterte’s annointed in 2022
Kai Sotto continues to inspire Filipinos by sharing his passions and stories with Smart Prepaid
Alex Eala wins Grand Slam on Independence Day: ‘I hope I made my contribution to the country’
COLUMN: Making the republic work
MOST READ
Groups slam Duterte ‘surrender’ to China
1Sambayan bares nominees for president, vice president in 2022 polls
Nancy, Isko asked to pull out of 1Sambayan nomination, says Carpio
1Sambayan names 6 choices to pit vs Duterte’s anointed in 2022
Don't miss out on the latest news and information.