DUBAI, United Arab Emirates – Qatar on Tuesday said it is sending $480 million to Palestinians in the West Bank and the Gaza Strip after a cease-fire deal ended the deadliest fighting between Israel and Palestinian militants since a 2014 war.

Qatar’s Foreign Ministry said $300 million would support health and education programs of the Palestinian Authority, while $180 million would go toward “urgent humanitarian relief” in U.N. programs and toward electricity. 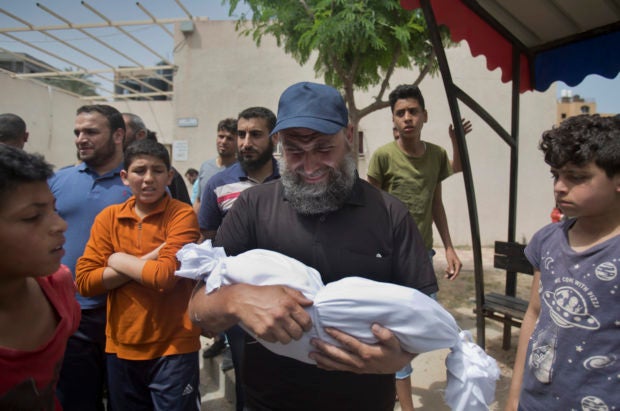 A man cries as he carries the body of a four-month-old Palestinian girl Maria Al-Ghazali, who was killed along with her parents in a late Sunday night Israeli missile strike on their family home, during her funeral in town of Beit Lahiya, northern Gaza Strip, Monday, May. 6, 2019. (AP Photo/Abdel Kareem Hana)

The recent two-day outbreak of violence killed 25 people in Gaza, both militants and civilians, and four civilians in Israel.

Hamas spokesman Hazem Qassem said Egyptian mediators, along with officials from Qatar and the U.N., helped reach the cease-fire deal.

The deal is believed to include a number of economic aid and development programs in Gaza, including providing additional electricity and creating temporary jobs in a territory where unemployment has skyrocketed over 50%.

The energy-rich, small nation of Qatar has become a major donor to the Palestinians.

Both Palestinian governments are in deep financial distress.

The Palestinian Authority has been hit hard by cuts of hundreds of millions of dollars of aid by the United States, as well as a dispute with Israel over tax transfers.

Israel has begun to withhold money from these transfers that it says the Palestinians give to families of Palestinian attackers who have been jailed or killed in fighting with Israel.

The Palestinians say the payments are social welfare to families affected by conflict, and they have refused to accept the tax transfers unless the funding is fully restored.

The aid cuts and refusal to accept partial tax transfers have plunged the Palestinian Authority into a deep crisis in which it is only able to pay its workers half of their salaries.

In the West Bank, Palestinian President Mahmoud Abbas thanked the Qataris and said the aid would “help the Palestinian people overcome some of their hardships, face the challenges and strengthen their steadfastness on their land.”

In Gaza, meanwhile, the economy has been ravaged by an Israeli-Egyptian blockade, years of fighting with Israel and Hamas’ isolation and mismanagement.

Cuts in aid from Abbas’ government, as well as U.S. cuts in funding for U.N. programs, have also hurt the coastal strip’s population.

“This honorable decision is a continuation of the unwavering Qatari stances that support the Palestinian people politically and financially, in addition to defending the Palestinian rights at international platforms,” he said. /gsg

Read Next
Alexander? James? Arthur? Guessing game on royal baby’s name
EDITORS' PICK
Cebu City closes its borders
BREAKING: 1,075 people in PH has coronavirus disease – DOH
Style and music journeys with Claudia Barretto
DILG to stranded workers: ‘Stay where you are’ until Luzon-wide quarantine is over
UP-PGH wards for COVID-19 patients finished in 5 days
IATF: Food firms to operate with 50% of workforce during Luzon quarantine
MOST READ
Pacquiao to seek probe on leaked private letter from Barangay Dasmariñas
Tootsy Angara bares neighbor wanted them out of village
McCoy bares devastating effect of failed romance with Elisse
What awaits medical volunteers in DOH drive vs coronavirus
Don't miss out on the latest news and information.