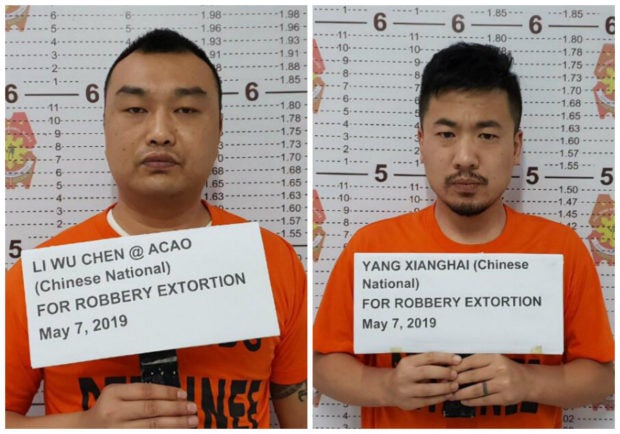 Photos from the Criminal Investigation and Detection Group

A report from the CIDG on Tuesday said complainant Chen Yu Kang lodged a complaint against the two for allegedly extorting cash from him.

Prior to the extortion, police said the suspects allegedly lured the victim to enter into an investment scam in January this year, where the victim invested P1 million before finding out that the investment was bogus.

On May 3, the suspects allegedly demanded P150,000 from the complainant in exchange of him not being harmed by the suspects. This prompted the victim to seek help from authorities, according to CIDG.

An entrapment was then launched against the suspects on Monday at around 6:30 p.m. at a mall along General Luna Street in Makati City, where only Li Wu Chen was arrested and Yang Xianghai managed to escape.

The CIDG confiscated P10,000 in marked cash and 50 pieces of boodle money during the entrapment.

A follow-up operation was conducted by the CIDG that led to the arrest of Yang Xianghai at around 11:20 p.m. along Seaside Boulevard in Pasay City.

Ibay told INQUIRER.net that the suspects failed to return the cash of the complainant even after their arrest.

The suspects are temporarily detained at the CIDG NCR office before undergoing inquest proceedings at the Makati City Prosecutor’s Office. /jpv