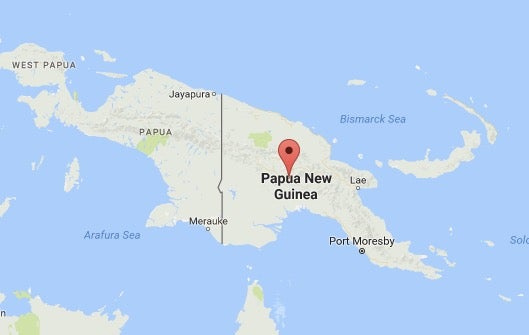 The quake struck at a depth of 127 kilometers (80 miles) about 30 kilometers (20 miles) from the town of Bulolo at 2119 GMT Monday according to the US Geological Survey, and was felt in the capital Port Moresby about 250 kilometers away.

Officials said there were no immediate reports of major damage and the depth of the tremor meant there was no tsunami threat.

“We have no reports as yet” of serious damage, Inspector Leo Kaikas, Bulolo police station commander, told AFP. “We are still assessing the situation,” he said.

Staff at Bulolo’s Pine Lodge hotel said there was very minor damage from objects falling off tables, but nothing more serious.

Residents in Lae, more than 100 kilometers away, said the quake knocked things off shelves and worktops and cut electricity in some areas.

“I had just woken up,” Christopher Lam, a designer who lives in the city, told AFP. “It lasted a little more than 30 seconds. We had household items knocked off their shelves and the power got cut.

“Things seem to have returned to normal. No structural damage here, though I’m not sure about other buildings in the city.”

There are estimated to be around 110,000 people living within 50 kilometers of the epicenter, according to UN data.

The Moresby-based National Disaster Management office said while there were no early reports of damage, but news from the quake zone could take time to trickle in.

“We are awaiting assessments,” a spokesman told AFP.

The country’s rugged highlands region was hit by a 7.5-magnitude quake in February last year that buried homes and triggered landslides, killing at least 125 people.

The scale of that disaster did not become apparent for days due to PNG’s poor communications and infrastructure.

There are regular earthquakes in Papua New Guinea, which sits on the so-called Pacific Ring of Fire — a hotspot for seismic activity due to friction between tectonic plates.

Along the South Solomon trench, an area of the Pacific that includes PNG, there have been 13 quakes of magnitude 7.5 or more recorded since 1900, according to USGS data. /cbb

Read Next
100 ‘Evitas’ take to the streets of Argentina’s capital
EDITORS' PICK
Cebu City closes its borders
IATF: Food firms to operate with 50% of workforce during Luzon quarantine
BREAKING: 1,075 people in PH has coronavirus disease – DOH
UP-PGH wards for COVID-19 patients finished in 5 days
Style and music journeys with Claudia Barretto
DILG to stranded workers: ‘Stay where you are’ until Luzon-wide quarantine is over
MOST READ
Locsin blasts DOH for blocking entry of Chinese doctors
Another doctor dies due to COVID-19 in Cebu City, doctor-husband critical
DOH pressed to expand, speed up virus testing
No more bread? Company forced to limit production
Don't miss out on the latest news and information.