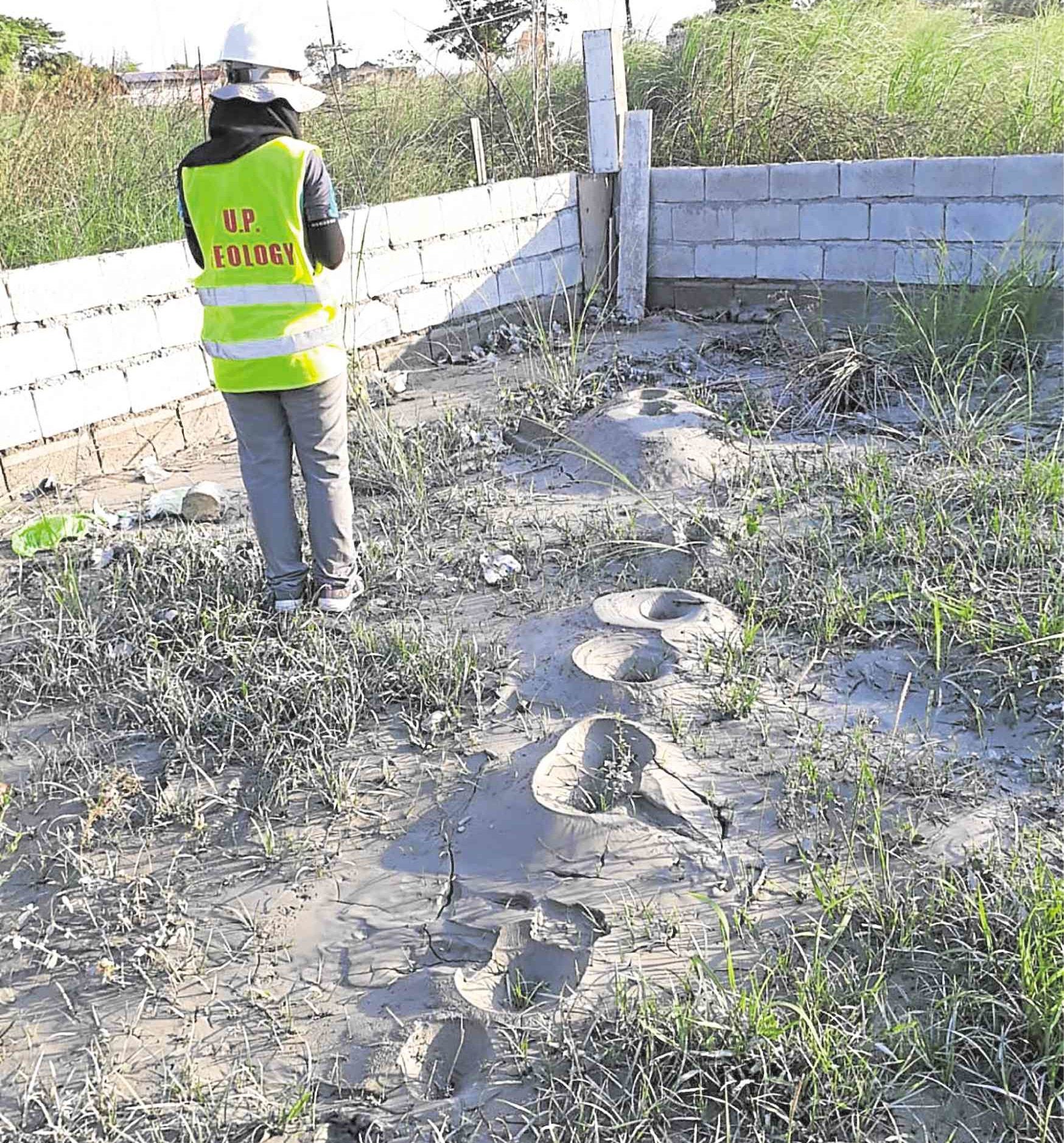 SIGN OF LIQUEFACTION After the April 22 temblor, mud volcanoes cropped out of a residential lot at Barangay Potrero, Bacolor, Pampanga. They are signs of liquefaction, a process that makes saturated sandy material behave like liquid when shaken.

MANILA, Philippines — That was one hell of a day” was the last message I sent to a Viber group of professional geologists around 11 p.m. last April 23. I had provided virtual feeds as members of the Quick Response Team (QRT) of the University of the Philippines’ National Institute of Geological Sciences (UP-NIGS) went around Pampanga, Bataan and Zambales to assess the infrastructure damage and geologic manifestations of the 6.1-magnitude earthquake that hit these provinces the previous day.

At 5:11 p.m. of April 22, project research assistant Yvette Cesista and I were in our lab discussing future tasks when I felt the floor shake rapidly for a couple of seconds, followed by a longer period of swaying, mainly horizontal, for at least 30 seconds more. From the swaying of the window blinds, I reckoned we had just experienced intensity 6 shaking.

About a minute later, Jagu Escudero, my university research associate, came to call us out of the room in his role as earthquake drill marshal.

Along with other marshals, he ushered everyone out of the NIGS building and led us to the front yard for proper accounting. After 15 minutes, the marshals reported 136 building occupants, including teachers, students, researchers, administrative staff and visitors.

As the de facto person in charge, I reported the count to the group and then signaled that it was safe for us to return to our workplaces; at the same time, I instructed them to check on their rooms and pay particular attention to structural damage.

Before going back in, I heard a student comment that our earthquake drills had paid off.

Back in the lab, Jagu, Yvette and I were joined by two of my master’s student advisees, Maryam Salabi and Lawrence del Rosario, to monitor ensuing events, including news bits on infrastructure damage mostly in Pampanga.

Around 8 p.m. I had convened the five of us to compose the first UP-NIGS QRT. We were to leave early the next day to perform rapid assessment onsite with NIGS mechanic-driver Gerardo Sumat.

Jagu toiled till 3 a.m. to produce a map to guide us in our investigations. It contained information on the trace of active faults in the area, location of the epicenters of the main quake and aftershocks, and focal mechanism solutions (FMS) computed by seismological observatories worldwide.

During a major earthquake, among the first things seismologists do is calculate the FMS of the main shock to determine the parameters of the rupturing fault, including its orientation and mechanism. These parameters guide field geologists in finding the trace of that fault on the ground, thus the moniker “fault finders.”

Not on existing maps

In search of the possible ground rupture, our QRT directed its efforts on the mountain range between the municipality of Castillejos in Zambales and Mt. Pinatubo, where the epicenters of the main quake and aftershocks had been plotted by the Philippine Institute of Volcanology and Seismology (Phivolcs).

But our efforts were fruitless, mainly because the mountainous terrain and tuffaceous subsurface do not preserve ground rupture well, especially with a relatively weak magnitude.

On the third day, Phivolcs QRTs continued to scale the flanks of Mt. Pinatubo in an attempt to find that elusive ground rupture.

Whether it ruptured the surface or not, the earthquake confirmed the presence of an active fault underneath Mt. Pinatubo. Since this fault does not appear in existing active fault maps, this is another case of an earthquake generated by a previously unknown fault, in the same league as the previously unknown Visayan faults that generated two destructive earthquakes in Negros Oriental (6.9-magnitude, Feb. 6, 2012) and northwest Bohol (7.2-magnitude, Oct. 15, 2013).

An active fault under an active volcano is a cause for concern to some, because there are studies that show the possible triggering effect of a tectonic earthquake on a nearby volcano. Such studies, conducted in countries like Italy, Greece, Turkey, New Zealand and Japan, where the tectonic scenario is similar to that of the Philippines, revolve around the theory that the stress released by a fault during an earthquake does not disappear in space but simply moves to another location.

If this location is a volcano, stress conditions in its magma chamber may consequently increase and promote magma circulation.

The collapsed Chuzon Supermarket was where the biggest number of casualties was reported. The four-story building collapsed vertically, with the top floor resting at ground level and the three lower floors flattened into a pile of metal and concrete no more than 2 meters high.

Similar infrastructure damage was observed in the 7.2-magnitude Bohol earthquake of 2013, but that was over one order of magnitude higher, meaning that the energy released then was more than 30 times greater.

So the vertical collapse of the supermarket has become a matter of discussion among engineers, raising the issue of its structural integrity. The issue is further amplified by the fact that the other buildings around it barely registered damage.

The earthquake also damaged centuries-old churches in Pampanga, such as those in the towns of Porac and Lubao. The façade and bell tower of Porac Church that date back to the 1800s collapsed, while the bell tower roof of Lubao Church built in the 1600s fell off.

According to parishioners, it was the first time their church was thus damaged. Scars on old  churches all over the country serve as records of disasters caused by natural phenomena, such as earthquakes and volcanic eruptions.

In Pampanga, it may mean that the interval between successive earthquakes of similar magnitude may be in the order of a few to several hundred years.

The church at Barangay Potrero in Bacolor has recorded two recent major disasters in a span of less than 30 years. Built in the same location but above the old church buried by 1991 Pinatubo lahar, it has been damaged by the Zambales earthquake.

In the same barangay, numerous mud volcanoes  and sand boils appeared in various locations. These are manifestations of liquefaction, a process that makes saturated sandy material, when shaken by an earthquake, start behaving like a liquid.

Ground water energized by the shaking is expelled to the surface, allowing the surrounding muddy sand to form conical mounds—thus the name “mud volcano.”

Much of the old town of Bacolor is buried in several meters of Pinatubo lahar, such that many of the new communities are actually built over old ones. Some superstitious residents who had decided to settle over old dwellings now wonder if the earthquake was a way for the ghosts of the buried civilization to haunt them.

But one thing is certain: The more intense infrastructure damage in Porac, Lubao, Bacolor and Floridablanca, despite being located farther away from the epicenter, was enhanced by the poorly performing thick lahar deposits underlying these towns.

The April 22 Zambales earthquake was an unwanted answer to a question I never really wished to ask. It reminds us once again that almost anywhere in the Philippines, a destructive earthquake is bound to happen any time.

What matters, therefore, is to be prepared at all times. The collapse of Chuzon Supermarket is another grim reminder  that we have not learned our lessons from past earthquakes.

Mario A. Aurelio, Ph.D., is a professor at UP and current director of UP-NIGS, where he heads the Structural Geology Laboratory. Among his research interests is the study of active faults and earthquakes.