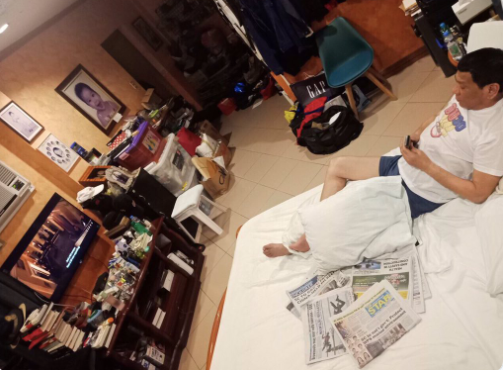 NADI, Fiji–It was a Netflix-binging weekend for President Rodrigo Duterte, watching Quentin Tarantino’s “Django Unchained” on his bed in Davao City Saturday, even as the country wondered where he was these past few days.

Tourism Secretary Bernadette Romulo-Puyat, who on Saturday attended the 52nd Annual Meeting of the Manila-based multilateral lender Asian Development Bank (ADB) in this Pacific island-country, earlier texted Mr. Duterte to ask where he had been, telling Filipino reporters here that GMA-7 journalist Joseph Morong had asked her: where is the President?

Romulo-Puyat was a panelist for the CNBC-sponsored debate titled “Transparent Tourism: Driving Growth and Sustainability,” where the tourism chief talked about the successful six-month rehabilitation of top tourist destination Boracay Island.

“Boracay is now a buzz word—everyone was talking about Boracay,” she said.

At past 4 p.m. Fiji time—past 12 noon in the Philippines–Romulo-Puyat’s phone rang such that she had to excuse herself from the journalists interviewing her, which besides the Inquirer included Philippine Star’s Amy Pamintuan and Business Mirror’s Cai Ordinario.

“Sorry, it’s the President calling. ‘Hello, Mayor…,” she said as she rushed outside the Westin suite where the interview was going on.

Romulo-Puyat’s ringtone for the President? The theme song of the 1981 British film “Chariots of Fire.”

The call lasted about eight to nine minutes.

As Romulo-Puyat returned to the room, she was telling the President: “Ipapakita ko sa kanilang tatlo,” before saying goodbye to end the call.

Sent to Romulo-Puyat about 22 minutes later, the photo showed the President watching a movie on Netflix, which Tourism Assistant Secretary Howard Lance Uyking later identified as the 2012 movie “Django Unchained.”

We’re interviewing Tourism Sec. Berna Romulo-Puyat on the sidelines of the 52nd @ADB_HQ Annual Meeting in Nadi, Fiji, then President Duterte called her up. She asked the President where he is now. President Duterte sent her this photo: he’s watching Netflix in Davao @InquirerBiz pic.twitter.com/UCkORTXbUa

In his bed were copies of Saturday’s newspapers.

Romulo-Puyat said that when she confronted the President about rumors that he was missing, he supposedly replied: “Bakit, masama bang nanuod ng Netflix? Sabado naman.”

The President also told Romulo-Puyat that he loves watching “Breaking Bad” on the streaming site. /jpv