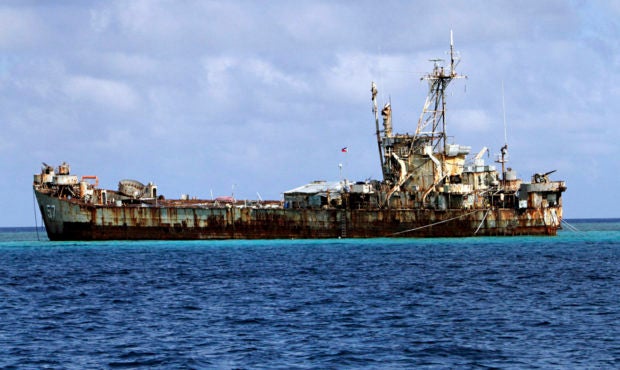 OUTPOST The BRP Sierra Madre was deliberately ran aground by the Navy on Ayungin (Second Thomas) Shoal in 1999 to mark it as Philippine territory. —GRIG C. MONTEGRANDE

The Supreme Court on Friday issued a special order for the protection and rehabilitation of destroyed marine environment in three Philippine features in the West Philippine Sea (WPS) that were either seized by China or surrounded by Chinese vessels.

In a special full-court session on Friday, the Supreme Court granted the petition of a group of Palawan fisherfolk and Zambales residents seeking to prevent environmental law violations within the country’s exclusive economic zone (EEZ).

Panatag Shoal is part of Masinloc, Zambales, while Ayungin Shoal and Panganiban Reef are part of the municipality of Kalayaan, Palawan.

Abdiel Fajardo, president of the Integrated Bar of the Philippines (IBP), said the issuance of the writ of kalikasan by the Supreme Court affirmed their position that the three reefs, which are all within the country’s 370-kilometer EEZ, should be protected by Philippine authorities from further environmental degradation.

“This affirms at this juncture the Philippine position made before the international arbitral body that the disputed islands falls within the EEZ of the Philippines, and must therefore be protected by Philippine authorities as required by the Constitution and domestic environmental laws,” Fajardo said.

The issuance of a writ of kalikasan also shows “that the Philippines, at least through the judiciary, is not waiving its rights over them by acquiescing to the unilateral actions of another state,” he added.

Introduced by the Supreme Court under then Chief Justice Reynato Puno in 2010, the writ of kalikasan is a legal remedy that provides protection of one’s constitutional right to a healthy environment.

It invokes Section 16, Article II of the Constitution, which states the “state shall protect and advance the right of the people to a balanced and healthful ecology.”

The IBP filed the petition on April 16 after the Department of Foreign Affairs announced it would take legal action against China for illegally harvesting endangered giant clams and for destroying corals at Panatag Shoal.

The IBP said the government’s inaction on the activities of Chinese fishermen in contested areas in the South China Sea violated the Convention on International Trade in Endangered Species of Wild Flora and Fauna, the Philippine Fisheries Code and Presidential Decree No. 1586, which established the Environmental Impact Statement System.

The petitioners invoked the July 12, 2016 ruling of the Permanent Court of Arbitration which dismissed China’s sweeping claims over almost the entire South China Sea, including the West Philippine Sea.

The tribunal instead upheld that Ayungin Shoal, which is guarded by a tiny Philippine Marines contingent aboard the rusting Navy vessel BRP Sierra Madre but surrounded by Chinese vessels, and Panganiban Reef were within the Philippines’ EEZ.

The arbitral tribunal said that while Panatag Shoal is a traditional fishing ground, Chinese-flagged vessels have destroyed the coral reef ecosystem by harvesting giant clams and other endangered species.

Read Next
Website owner held for ‘Bikoy’ video willing to help gov’t probe
EDITORS' PICK
Get exciting deals and discounts when you download the new McDonald’s App
DOH: Second person ‘under investigation’ for 2019-nCoV in Tacloban City
China expands lockdowns to 25M people to halt viral outbreak
5-year-old Chinese boy in Cebu tests negative for novel coronavirus
SM continues to send relief assistance to remote towns in Batangas
‘A greener, cleaner tomorrow’: A how-to guide for Filipinos who want to help with today’s energy crisis
MOST READ
Dina Bonnevie on Coney Reyes: We have forgiven each other
Philippines orders 12 helicopters from Russia—Duterte
Taal Volcano flexes signs of restiveness anew
DOH: Second person ‘under investigation’ for 2019-nCoV in Tacloban City
Don't miss out on the latest news and information.