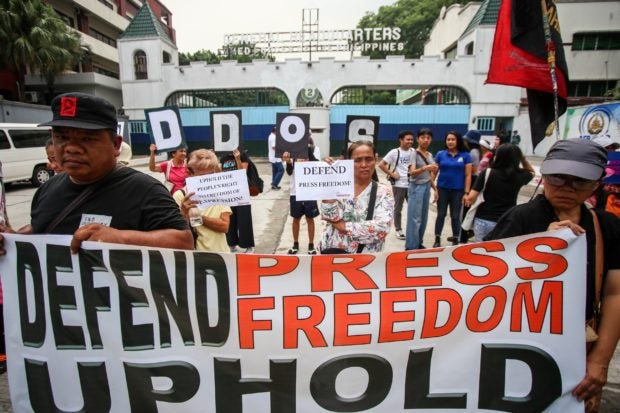 The “attacks” have come in ways old and new—and they’re keeping count.

A network of media organizations in the country marked World Press Freedom Day on Friday by quantifying what it called the “systematic and insidious” assault on journalists since President Duterte took office in 2016.

From June 30, 2016, a total of 128 cases involving intimidation of and threats to individual journalists or media outfits have been recorded by the Freedom for Media, Freedom for All network.

Ten of the cases involved the hacking of news websites, including DDoS (distributed denial of service) attacks, or malicious attempts to disrupt the traffic of a targeted server; eight cases concerned reporters being barred from coverage; and eight involved journalists who survived attempts on their life.

Other cases involved threats of violence directed at journalists on social media and threats of arrest stemming from libel complaints.

The network—which includes the Center for Media Freedom and Responsibility (CMFR), Philippine Center for Investigative Journalism (PCIJ), National Union of Journalists of the Philippines, Philippine Press Institute and MindaNews—said the past three years had also seen the rise of new forms of media harassment.

“Corporate-related issues [raised by the government against media companies] were practically absent during the past administrations, such as the withdrawal of SEC (Securities and Exchange Commission) registration, tax evasion cases, etc. Website attacks were also very rare then,” Luis Teodoro, board member of CMFR, said at a press conference.

“Despite divisions in the Philippine press and conflicting political and economic interests, we should come together and resist this impending catastrophe,” he added.

The most recent attack was launched via the so-called oust-Duterte matrix, a diagram produced by Malacañang linking several journalists to a supposed plot to overthrow Duterte, the network said.

“The matrix was deliberately manufactured and produced with the purpose of deceiving the public,” said Ellen Tordesillas of Vera Files, a journalist who figured prominently in the diagram. “It’s laughable, but it’s also alarming because the government can do practically anything [and] they don’t care whether the information is correct or not.”

The Foreign Correspondents Association of the Philippines (Focap) said it was linking arms with fellow journalists everywhere “at a time when governments have sought to paint the free press as enemies of states to muzzle us and escape accountability.”

“This is not a time to bend and shrink. Born during the Marcos dictatorship, Focap emerged to fight blatant media censorship and harassment, and serve as a force for truth in one of the country’s darkest eras,” it said. “Today’s tools for media repression may be different, but Focap as always remains committed to speaking [the] truth to power fearlessly and without compromises.”

The College Editors Guild of the Philippines (CEGP) said it had documented more than 1,000 cases of “campus press freedom violations” since 2010.

These include cases of censorship and “unjust” school policies that stifled critical reportage or commentary in campus publications, CEGP said

In a statement commemorating World Press Freedom Day, presidential spokesperson Salvador Panelo said the administration “does not condone media violence and repression of information” and “assures members of the press that it will support them in the free exercise of their profession, and in crafting accurate, fair and nonpartisan reports for the Filipino people.”

Panelo cited presidential orders “which advance freedom of information” in the executive branch as well as the protection of media workers through the creation of the Presidential Task Force on Media Security. —WITH A REPORT FROM JULIE M. AURELIO