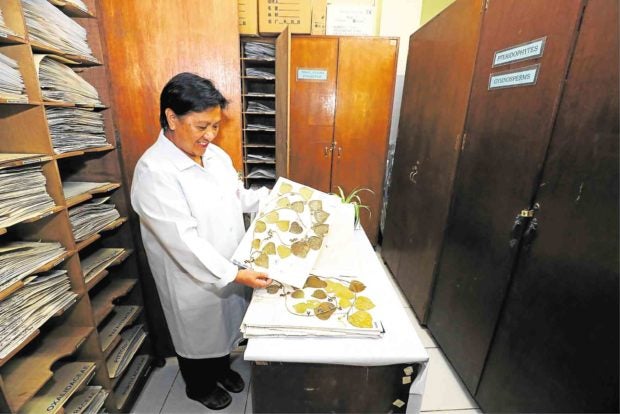 HOPE IN HERBS Professor Teodora Balangcod of the University of the Philippines Baguio sifts through plant specimens found in the Cordillera that she has collected since 1987. A project involving universities in Baguio City and Benguet will tap the region’s forests to find cure to diseases. ROLAND RABANG / CONTRIBUTOR

BAGUIO CITY — The search for a cure to growing antibiotic resistance as well as ailments like diabetes is being spearheaded by top universities here and in Benguet province which have banded together to harness the medicinal qualities of Cordillera plants.

The Tuklas Lunas Development Consortium of the University of the Philippines (UP) Baguio, the Saint Louis University (SLU) and the Benguet State University (BSU) was launched here on Friday by Science Secretary Fortunato de la Peña, who described the collaboration as a “breakthrough.”

Using a P64-million allocation from the Department of Science and Technology (DOST), the consortium is building an “interuniversity and interdiscliplinary scientific collaboration” aimed at exploring the health care benefits of the Cordillera’s biodiversity, said Dr. Dymphna Javier, dean of the UP Baguio College of Science.

UP Baguio is drawing up an online database of Cordillera plants with medicinal potentials as its mission for the consortium.

The country’s plant taxonomy information owes much to the fieldwork of the late UP botanist, Leonard Co, who discovered five new plant species.

Other UP researches have tried to tap the anti-inflammatory properties of indigenous herbs used by upland communities for centuries.

A team from BSU led by an engineer, Louisa Pladio, is analyzing and putting up standard dosages for Benguet herbs used to manage diabetes, hoping to guide researchers as well as herbal supplement and pharmaceutical firms.

Diabetes is a chronic disease characterized by hyperglycemia, or high blood sugar count that could prove fatal because ailing people are unable to produce—or generate little—insulin.

The SLU pharmacy department will evaluate the plant derivatives uncovered by the BSU analyses, intent on bringing more plants into the “drug development pipeline.”

The most significant plant derivatives being studied by UP and SLU involve Benguet species that could counteract human bacteria, which break down antibiotics taken to cure illnesses, given the impact of a warming climate and fear of vaccines on public health care.

In 2017, the World Health Organization released a list of drug-resistant pathogens “to address growing global resistance to antimicrobial medicines.”

UP’s microbiology laboratory attempts to locate fungi that possess what it calls “epipolythiodioxopiperazine” gene clusters, which could be useful in breaking down drug-resistant bacteria.

These studies will run for two years, according to Prof. Teodora Balangcod, the consortium’s program head. She said more universities would be invited to join the consortium. —VINCENT CABREZA