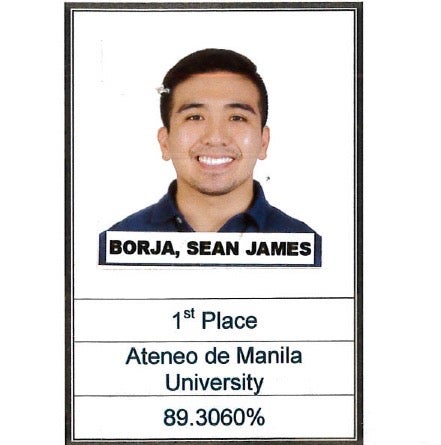 MANILA, Philippines — By topping the 2018 Bar Exam, Sean James B. Borja, an Ateneo de Manila University law school valedictorian, wants to debunk the myth that members of the LGBT (lesbian, gays, bisexual, and transgender) are only meant for entertainment.

Borja, in a television interview after the Supreme Court released last year’s Bar Exam passers Friday afternoon, admitted there were times during his journey to become a lawyer when he doubted himself just because he’s gay.

He said he was bullied in school.

“During grade school, you know how in grade school, from being bullied for being different, and that leads to high school and college as well, where you think you’re not good enough to be at the top, to be a lawyer, to follow your dreams just because of who you are,” Borja recalled in an interview with ABS CBN News Channel.

“Definitely, yes, there were a lot of times where I doubted myself,” he added.

Fortunately, Borja’s steadfast determination enabled him to rise above adversaries and overcome his insecurities.

Borja decided to become a vocal advocate of LGBT rights since he experienced being bullied and discriminated when he was younger.

“For a long time, I was made to believe that members of the LGBT community could never be anything beyond mere providers of entertainment,” he wrote on Facebook in 2017.

“Eh bakla ka eh, so hanggang parlorista ka lang. O ‘di kaya talk show host. So don’t ever make the mistake of telling anybody about who you are. Don’t come out. Fake it,” he also wrote.

But Borja pointed out that people like him have made “great strides” in their respective fields.

“And yet all around, I’ve seen people like me who’ve made great strides in the fields of law, science, business, the arts, and even politics – more so than their ‘normal’ counterparts,” he further wrote.

So now that he’s already a lawyer, Borja said: “I think what I would really want to show is to keep pushing my limits to show that people like me, people from my community, can achieve so much if people will just listen and look out for us.”

As for his message to fellow Bar Exam passers, Borja urged them to stay humble, shed any idea of being privileged, and always contribute to society.

“I want to tell them that a lot of lawyers in the Philippines think that it ends with passing the Bar, with just having the title abogado (lawyer), but it really doesn’t,” Borja pointed out.

“I hope they reconcile any notion of self-entitlement, if any, and just tell themselves (to) humble themselves and just keep pushing, keep achieving their dreams, keep contributing to society without any expectation,” he also said. /kga