COPENHAGEN, Denmark – Scandinavian Airlines and its pilots have reached a three-year collective bargaining agreement that put an end to a six-day strike that grounded more than 4,000 flights and affected hundreds of thousands of passengers. 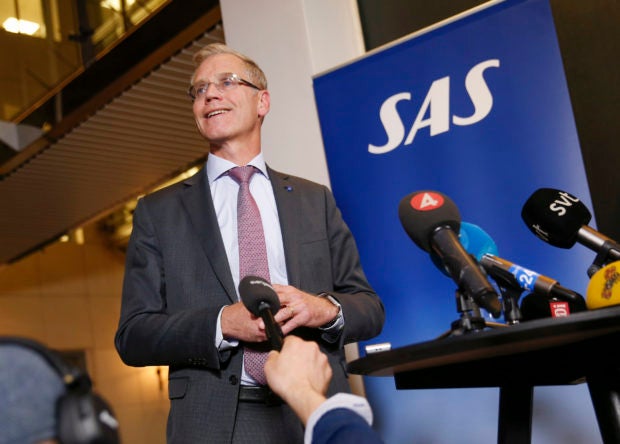 President and CEO of Scandinavian Airlines (SAS) Rickard Gustafson speaks during a press conference at the company’s headquarters in Frosundavik, Stockholm, Thursday, May 2, 2019. (Fredrik Persson/TT News Agency via AP)

Laulund said his members wanted to address “the fact that SAS pilots are far behind their colleagues in other European airlines, and that the pilots have a considerable lag due to large wage and pension cuts in 2012 when the company was close to bankruptcy.”

“It has been an ambition to close some of this gap, but the most important thing has been employment security and predictable working hours. SAS will continue to be a company with good, safe Scandinavian jobs,” he said.

Gustafson said late Thursday that the carrier “operates in a highly competitive market, and with these agreements we now need to intensify our work to build a long-term profitable and sustainable SAS.”

It was too early to provide an estimate of the financial effects of the strike, Gustafson said, adding some 360,000 passengers had been affected by the 4,015 canceled flights.

Jacob Pedersen, an analyst with Denmark’s Sydbank, earlier estimated that the strike would cost the company between 60 million and 80 million Swedish kronor ($6.3-8.4 million) a day.

The strike started April 26 after talks between the airline and SAS Pilot Group, which represents 95% of the company’s pilots in Sweden, Denmark and Norway, collapsed.