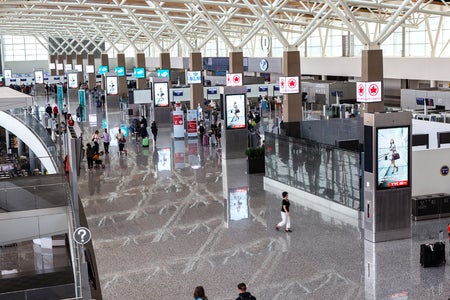 A man from British Columbia, Canada, was forced to crawl during his vacation with his wife after the batteries of his portable scooter were confiscated by an airport security agent and an airline official.

Stearn Hodge, 68, lost his left arm and right leg in 1984 after a workplace accident. He and his wife were supposed to go on a vacation to celebrate their 43rd wedding anniversary, as per the Canadian Broadcasting Corporation on April 28. But what was supposed to be a fun trip for the couple took a sharp turn when a security agent at the Calgary International Airport and United Airlines seized his scooter’s batteries.

“Having to crawl across the floor in front of my wife is the most humiliating thing that I can think of,” Hodge said in the report. “It unmasks how real my disability is… I haven’t been the same since.”

The incident happened back in February 2017 when the couple were supposed to go on a trip to Tulsa, Oklahoma. As per the report, an airport security agent and an airline official told Hodge to remove his scooter’s battery and its spare, and fly without them.

Hodge said he received permission to travel with his scooter’s batteries, but the agent and the airline official did not listen to him or read the global standards issued by the International Air Transport Association (AITA) that he had printed out.

Instead, he was told by the security agent to get a wheelchair. His wife was unable to push a wheelchair for him since she had just undergone cancer treatment that affected her spine.

“How’s a one-armed guy going to run a wheelchair?” said Hodge. “How am I going to go down a ramp and brake with one hand? But that shouldn’t even have to come up.”

Their three-week vacation thus turned into Hodge being confined to bed. As per the report, he had to drag himself across the hotel room floor just to get to the bathroom.

United Airlines has since apologized for the “inconvenience” and gave Hodge and his wife an $800 travel certificate. He, however, wants his case to be heard by the Canadian Human Rights Commission. His lawyer, John Burns, plans to ask a Federal Court judge this May to have the commission hear his client’s case.

“It sends a very clear message to the airlines and everybody else involved,” Burns said in the report. “People with disabilities should be taken seriously. You don’t take away somebody’s legs and then describe it as an inconvenience. No, this is an injury.” Cody Cepeda /ra