In Zamboanga, schools of ‘danggit’ turn belly up 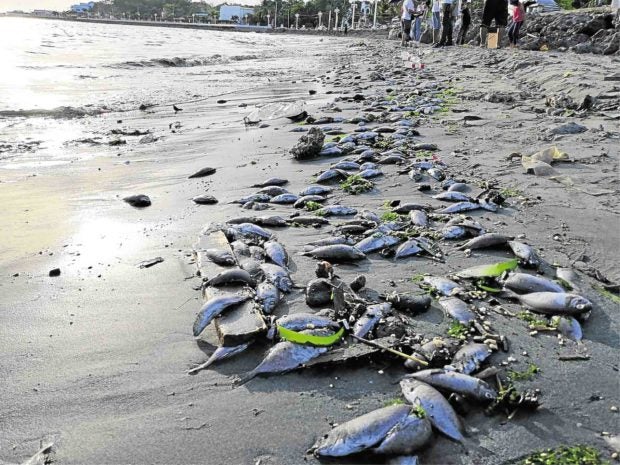 Why these schools of fish died and ended up on the beach along R.T. Lim Boulevard was still a mystery, according to Pedling Munap, chief regulations officer of the Bureau of Fisheries and Aquatic Resources (BFAR) in the city.

“We are all surprised (by) this (occurrence). We will have some specimen (taken) for laboratory testing to determine the cause of their death. Earlier, we received a report that it was a fish kill, but it was too early to say that,” Munap told the Inquirer in on online message on Thursday.

The dead danggit (siganid, or Siganus corallinus), were fingerlings, each measuring about 3 inches, he said.

“This type of fish usually thrives in seaweed farms because [they feed on] seaweeds,” Munap said.

He said the BFAR could not identify yet where the schools of fish came from before they were washed ashore, since most of the coastal areas in Zamboanga City were surrounded by private seaweed farms.

Even as the BFAR was still waiting for the result of laboratory tests, Munap said it was likely that the low dissolved oxygen level in offshore fish farms brought about by the dry spell and the sudden downpour in the city early this week could have affected water quality and caused the fish kill.

Sheila Belen Covarrubias, the city’s communication officer, said Mayor Maria Isabelle Salazar had advised residents to refrain from swimming in waters off the boulevard and to avoid collecting dead fish.

Residents in coastal communities in the city were also asked to report similar occurrences in their areas and not to gather and consume the dead danggit.