Lacson on arrest of ‘Totoong Narcolist’ video uploader: Is it proper, legal? 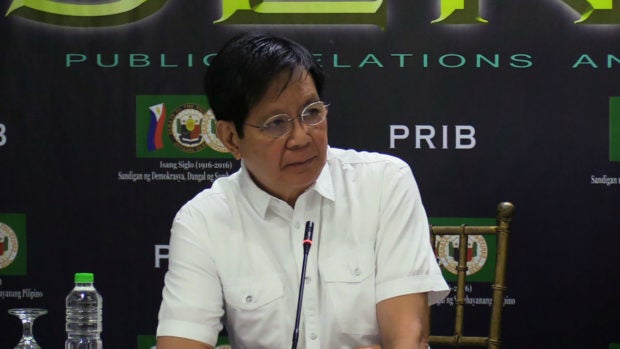 MANILA, Philippines — Is the arrest of the uploader of the “Totoong Narcolist” videos proper or legal?

Senator Panfilo “Ping” Lacson raised this question on Thursday after the  National Bureau of Investigation (NBI) reported the arrest of the unnamed uploader, who posted a series of videos linking the family of President Rodrigo  Duterte to the illegal drug trade.

“The first question that needs to be answered is, is the arrest proper or legal?” Lacson said in an interview over ANC’s “Headstart.” “Because under the Revised Penal Code, alam naman natin ang warrantless arrests, actually committing, about to commit, has just committed.”

“Unless he was arrested for violation of another crime and then he willingly subjected to preliminary investigation on this particular offense that he is known for, then the arrest could be considered proper.”

“But without a proper legal basis for conducting the arrest dito kay Bikoy, I think the DOJ (Department of Justice) or the NBI should explain why they arrested him,” added the senator.

Lacson, who chairs the Senate committee on public order, previously headed the Philippine National Police during the time of then President and now Manila Mayor Joseph Estrada.

When asked if he thinks the arrest was an abuse of discretion, Lacson said: “We don’t know yet. Because hindi natin alam ang circumstances ng arrest, ano ang legal basis for the arrest.”

“Until and unless we know that–ang circumstances–then we can’t conclude kung may abuse of power, kung may illegal arrest involved,” he pointed out. /jpv