Estrada advises Corona: Don’t quit but be ready to get ‘embarrassed’ 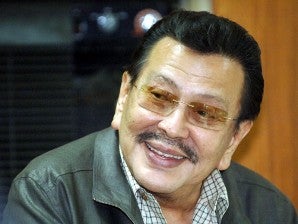 Welcome to the club.

Former President Joseph Estrada on Wednesday gave some bits of advice to Chief Justice Renato Corona: Ignore the calls for his resignation and just confront his accusers in his impeachment trial at the Senate.

“He is presumed innocent until proven guilty. If he resigns, it would appear that he is guilty. He should fight on,” said Estrada, who in Nov. 13, 2000, became the first Philippine President to be impeached.

Apparently speaking from experience, Estrada warned Corona that there would be instances in the trial where he would be “embarrassed” by forces  seeking his ouster.

Estrada recalled that his own impeachment trial 11 years ago turned into a “daily telenovela.” He said the media was partly to blame for supposedly “creating biased opinions against me.”

“I experienced all of it and it is likely to happen to him (Corona) as well. At the end of every hearing, there was already a conclusion against me. It was unfair,” the former President told the Philippine Daily Inquirer.

But despite the unpleasant experience awaiting him, Corona “should face trial if he is innocent,” Estrada said. “Democracy is at work here. All public officials, whether elected or appointed, should be made accountable. If he can defend himself in an impeachment trial, well and good.”

Estrada disagreed with the view that the impeachment trial was ultimately a political rather than a legal exercise. “Yes, it’s political, but I still believe that the law will prevail,” he said.

Estrada also conceded that it would be tough for Corona to deal with public perception, especially given the impression that he was a “midnight” appointee of then President Gloria Macapagal-Arroyo, who became widely unpopular herself during her nine years in power.

“It’s very difficult because he is against public opinion as created by the media,” he said. “He should get good lawyers and think about how to counter each allegation. He should always air his side.”

Estrada’s impeachment trial was aborted following the walkout of prosecutors from the House of Representatives. The walkout, seen on national TV, triggered the Edsa II uprising that eventually forced him to leave Malacañang in January 2001.