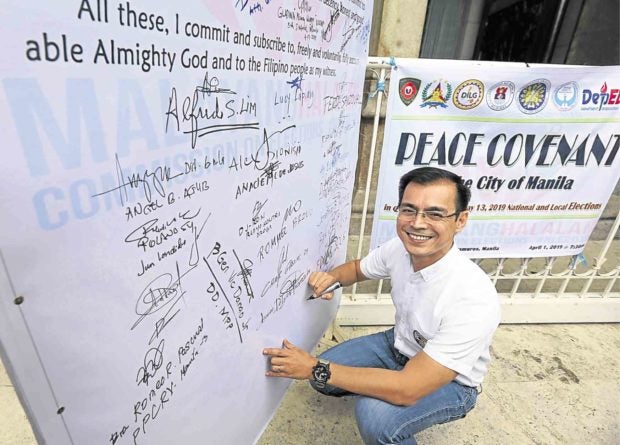 MANILA, Philippines — For actor-turned-politician Francisco “Isko Moreno” Domagoso, his mayoral bid is an attempt to reclaim Manila from someone who, though born in the city, has lived most of his life elsewhere.

Domagoso, who considers himself a “real Manileño,” is also serving notice to those who failed to live up to their promise to save Manila from squalor.

“We have given them enough time to fix this city,” he says, referring to his rivals, incumbent Mayor Joseph “Erap” Estrada and former Mayor Alfredo Lim.

“It’s undeniable how the capital of the country has deteriorated: economically, physically… [Whatever] Manila is now is the result of their nonperformance, nongovernance and passive leadership,” Domagoso tells the Inquirer.

He himself has served the city for nearly 20 years, however: first as a councilor for three terms starting in 1998 and then as vice mayor to Lim in 2007. He shifted alliances and became Estrada’s vice mayor in 2010 and 2013. In 2016, he made an unsuccessful bid for the Senate.

For the 44-year-old politician, his previous political stints can be considered merely “playing Robin to whoever Batman was at the time.”

“I think it’s time. I’ve waited, prepared myself, especially academically, since I did not have the opportunity to attend regular school at a regular age,” says Domagoso who has taken executive courses at the University of the Philippines, Harvard University and Oxford University.

“That’s probably why I received so much hate then. But I’m prepared now,” he added.

To prove this, he lays out a roadmap for what he will do should he win not just one but three terms as Manila mayor.

At the heart of that roadmap is a 10-year infrastructure plan intended to revitalize Manila’s “deteriorating” physical development.

Perhaps the most ambitious of those projects is the Manila Skydeck — an elevated walkway similar to the OCBC Skyway of Singapore’s Gardens by the Bay. To be built on Roxas Boulevard, it aims to revive tourism on the strip previously known as Baywalk.

Another is the proposed City Walk — a massive urban concrete overpass over Ermita’s streets — for the exclusive use of pedestrians and bikers.

Domagoso also intends to build a new city hall at Liwasang Bonifacio to give city and court employees decent and spacious working spaces.

But more than being mere blueprints for grand edifices to halt Manila’s rot, his plan weaves itself into better social services for Manileños.

Domagoso dreams of “bringing Makati to Manila” or replicating the financial capital’s best practices in healthcare, housing and education.

For example, he wants to build in-city vertical housing units for informal settlers and to clean up  Divisoria, Binondo and C.M. Recto by putting up commercial structures for street vendors.

Domagoso’s plans appear to be hinged on reclaiming spaces that have been lost to urban blight. “We need to make the city more habitable and hospitable. I’ll address first the needs of the people, [improve their] quality of life)” he says.

But for his plans to come to fruition, he must first win. While there are eight candidates for Manila’s mayorship, polls show him and Estrada as the leading contenders, with Lim a far third.

When it comes to the rigors of campaigning, Moreno’s youth gives him a clear advantage. He can be seen going door-to-door, courting voters.

But the slick politician, who likes to quote philosophers and historians in the lofty cadence of orators, remains largely underfunded. To compensate, he utilizes social media, often going on Facebook Live at his most pared-down, a la New York Rep. Alexandria Ocasio-Cortez.

If Domagoso wins, can residents count on Manila’s return to its former glory? “Do I have all the answers to these problems? No, I’m no Superman, but now they can have a 40-something-year-old leader,” he says. “It is safe to say I can still connect with the people.”