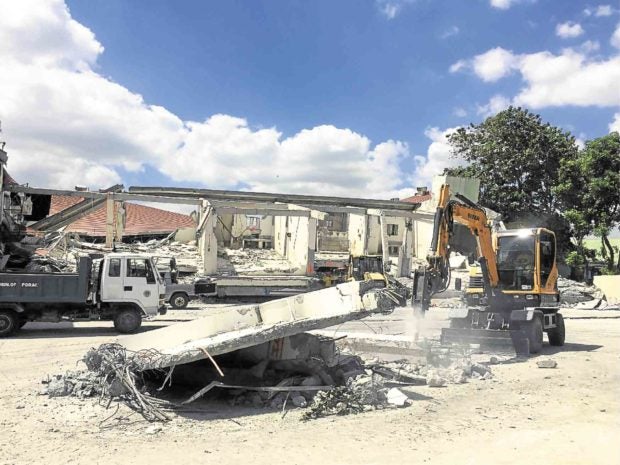 PORAC, PAMPANGA, Philippines — More than a week after Chuzon Supermarket here crumbled due to a 6.1-magnitude tremor, the tragedy may have disrupted the future of its workers who are mostly breadwinners.

On Wednesday, Labor Day, some store workers spent the day taking turns to keep watch over the collapsed structure.

They have been helping two security officers guard the quake-hit building against looters looking for grocery items stacked in the warehouse or for twisted steel bars and crumpled roofs they could sell.

They rest on a makeshift bed at the far right of the store.

“We are still working on Labor Day,” Jurela Micca Capara said to point out that Chuzon workers were not yet jobless.

But asked until when they would be employed by Chuzon owner Samuel Chu, Capara, 28, a purchaser from Casiguran, Aurora, said: “We are told to just wait.”

Although keeping the job seem uncertain, Crispin Castillo felt lucky. With 40 other workers, the 42-year-old stacker ran to the back exit door when the ground shook on April 22. “That was how I survived,” he said.

Castillo still managed to send money to his parents in Paniqui, Tarlac province, having received his last pay for the second half of March and seven days of April. He was paid P810 for 12 hours of work daily.

According to Castillo, he can go back to work in other Chuzon branches because he is a regular employee.

During the earthquake, the supermarket tilted, then its third and second floors crashed, pinning the first floor, according to warehouseman and survivor Marlo Pallasigue.

Mayor Condralito dela Cruz said investigators from the Department of Public Works and Highways had come to get documents pertaining to Chuzon’s building design.

He said he sent personnel of the municipal engineer’s office for a meeting with the probers.

In the collected debris, the Inquirer saw rebars made by Steel Asia (25 millimeters) and Capasco (10 mm and 25 mm). No grades were imprinted on these rebars as required by Philippine National Standards.

The National Disaster Risk Reduction and Management Council said the quake killed 18 people in Pampanga. At Chuzon Supermarket, five bodies were retrieved, including those of customer Manilyn dela Cruz, 30, and her two children.