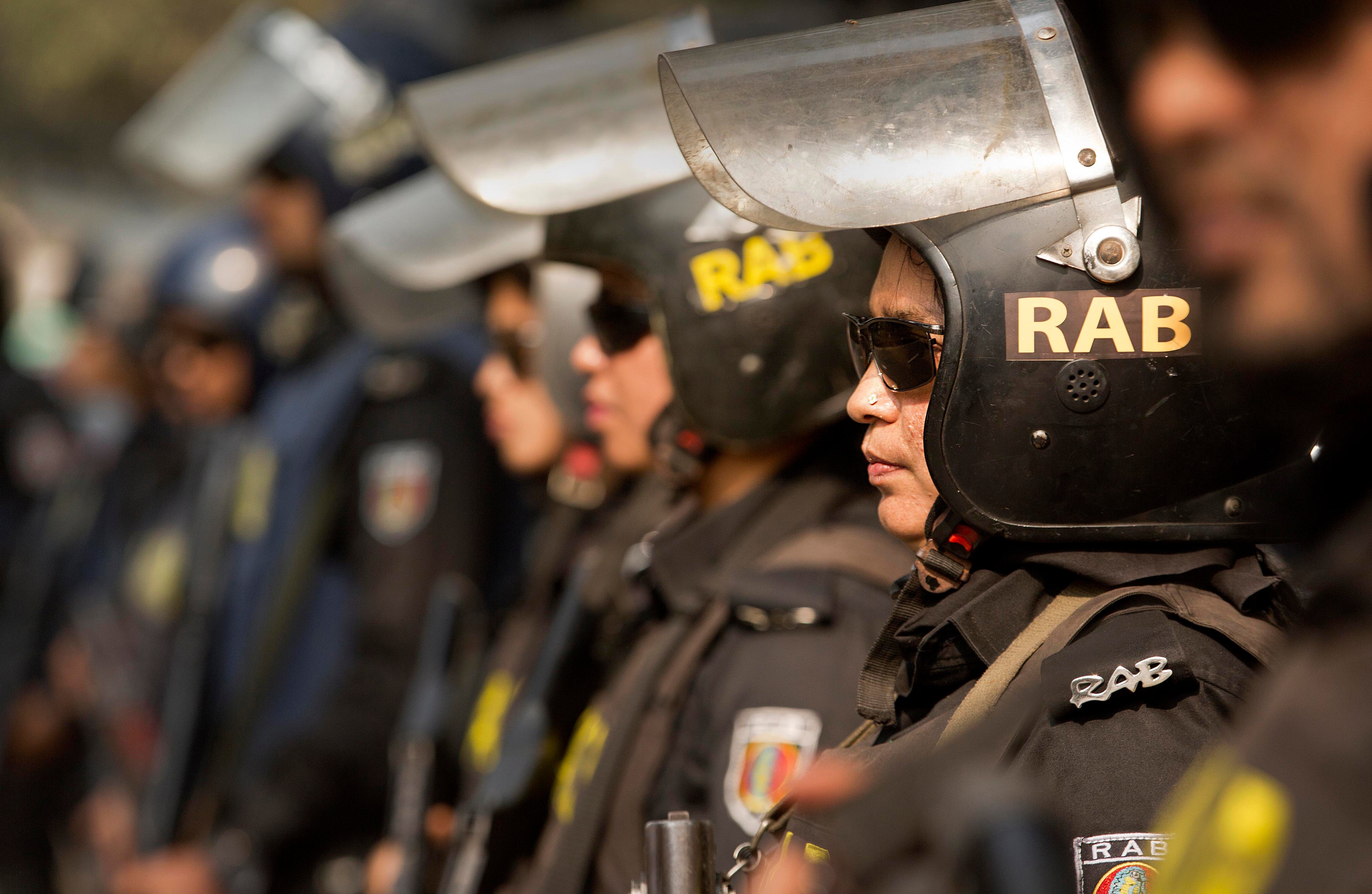 A December 29, 2018 file photo of Bangladesh police’s elite Rapid Action Battalion (RAB), a security force focused on combating extremist groups, in Dhaka, Bangladesh. Indian and Bangladeshi officials and security experts largely dismissed a fresh threat of violence from an Islamic State-aligned media group, insisting that routine monitoring of would-be militants would prevent a Sri Lanka-style attack from taking place elsewhere in South Asia. Al-Mursalat Media released a graphic on Tuesday of five militants who carried out a 2016 attack at a cafe in the diplomatic enclave of Bangladesh’s capital, Dhaka, according to global terrorism monitor SITE Intelligence. Mufti Mahmud Khan, a spokesman for RAB, told The Associated Press that he didn’t place “any great emphasis” on the threat released by the IS-aligned media group. (AP Photo/Anupam Nath, File)

NEW DELHI — Indian and Bangladeshi officials and security experts largely dismissed a fresh threat of violence from an Islamic State-aligned media group, insisting that safety measures and surveillance are adequate to keep militants from carrying out a Sri Lanka-style attack elsewhere in South Asia.

Al-Mursalat Media released a poster on Tuesday featuring a photo of five militants who carried out a 2016 attack at a cafe in the diplomatic enclave of Bangladesh’s capital, Dhaka, according to global terrorism monitor SITE Intelligence.

Below the picture of the militants, depicted carrying rifles and smiling, text states that the “soldiers of the khilafah,” or caliphate, in Bangladesh and India have not been “silenced” and “the anger of the mujahideen will suddenly bring destruction upon you.”

The poster, with text written in English, Hindi, and Bengali and sent over the media group’s Telegram channel, came as authorities in India and Bangladesh investigated activities with possible IS links while Sri Lanka pursued suspects tied to the coordinated Easter Day bombings at churches and hotels that killed 253 people.

M.K. Narayanan, the former chief of India’s external intelligence service, said that while he “wouldn’t read this as a harbinger of what they’re about to do,” President Donald Trump “is off the mark when he says that IS is dead.”

Police in Bangladesh are investigating an Islamic State-claimed small crude bomb explosion in front of a shopping center in Dhaka that injured three traffic police officers on Monday.

Mufti Mahmud Khan, a spokesman for Bangladesh’s Rapid Action Battalion, a security force focused on combating extremist groups, told The Associated Press that he didn’t place “any great emphasis” on the threat released by the IS-aligned media group.

Though the Islamic State (IS) group claimed responsibility for the 2016 Dhaka attack that killed 22 people, including 17 foreigners, Bangladeshi authorities have repeatedly denied that IS has a presence in the country. Officials, instead, blamed local militants from Jumatual Mujahideen Bangladesh, or JMB.

Since then, authorities have captured and killed dozens of suspects, and said JMB has been weakened if not eliminated completely.

“Maybe some small section will try to create some trouble, that’s the scenario across the world,” Khan said, but he didn’t “think any groups are capable of creating any big trouble.”

In India, the National Investigation Agency, in charge of counterterrorism, took the rare step this week of publicizing the arrests of four people on suspicion of links to IS, including a 29-year-old man who they said was a follower of the alleged mastermind of the Sri Lankan attacks and was plotting a suicide bombing in the southern Indian state of Kerala.

NIA official Alok Mittal said Thursday that he had seen the Al-Mursalat Media poster but declined to comment on it.

Former Indian military and intelligence officials say the Islamic State group does not appear to have much of a foothold in India, but that the diminished caliphate is far from defeated.

“The threat of attacks can’t be completed ignored,” said Lt. Gen. D.S. Hooda, a retired Indian army general who led the command in the disputed region of Kashmir. “You need only a handful of such guys to carry out such attacks. Sri Lanka is a major example.”

Sri Lankan security forces began investigating IS sympathizers and activity in the island nation in 2015, upon learning that Sri Lankan national Mohamed Mhuzeen Sarfaz Nilam had been killed in Syria in a U.S. airstrike. Nilam’s brother-in-law also later died fighting with IS.

Sri Lanka’s director of military intelligence, Brig. Chula Kodituwakku, said that about 35 Sri Lankans, including Nilam’s brother and other militants and their families, are embedded with the Islamic State group in Syria.

Kodituwakku said police are still determining whether any of the suicide bombers or other suspects linked to the Easter attacks trained or fought with IS overseas.

Mohammed Zahran, the leader of the militant group Sri Lankan authorities have identified as carrying out the attacks and himself one of the suicide bombers, trained in India, according to a Sri Lankan intelligence official who requested anonymity because he was not authorized to speak to reporters. It was unclear how long he may have stayed. /kga